Saturday Morning
There were 3 games in the morning, 2000ap encounters.
1. Desolate City 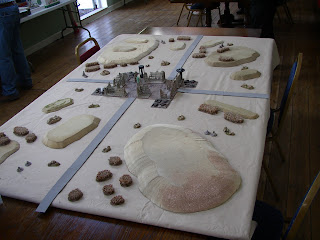 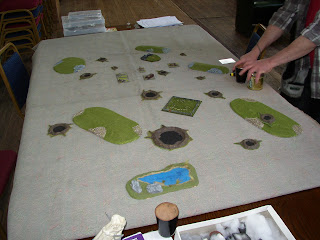 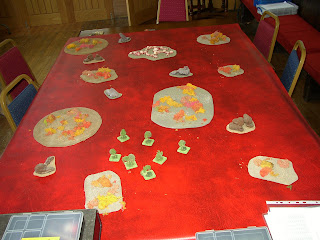 Gordon and I played on the Wastelands. He managed a Golden Duck, a blunder on first roll of first turn. 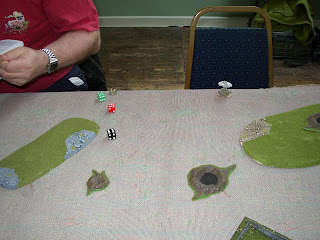 I laughed and then promptly did the same, Gordon laughed.

Gray Alien Mothership arrives, sadly I don't have enough Smart Missiles to kill it but manage to suppress it most turns until it gets its shields up. 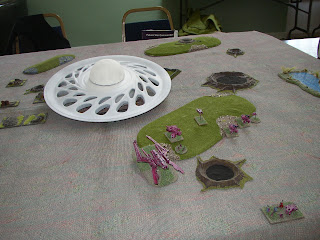 So I encircle it and go for commander overrun...but his commander has stealth so pops into the Mothership. 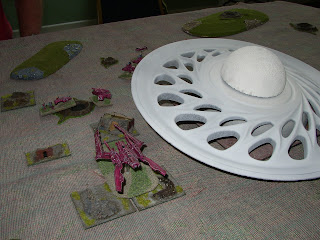 Eventually Gordon lands some troops and suppresses some Krays but pays the price and a load of Gray Aliens are toasted. 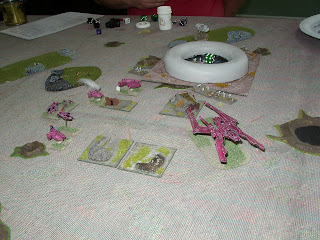 Sartorial Wars as hosted by Paul. Control the Tailors in the installation and the fabric producing worms too. Scenario as per that on BKC site. 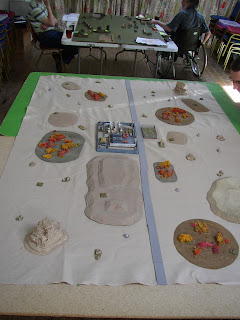 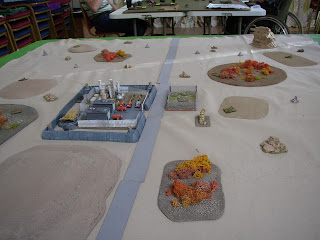 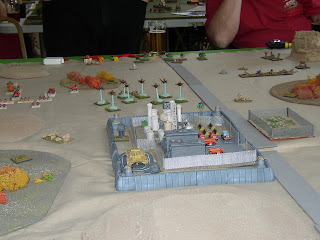 Colin the Merc' arrives to kill any Krays he can. Foolishly he reckons 4 bits of armour are easier targets than Gordon and Paul's Krays. Fool. That was the last wesaw of his army as my Arkalasts took him to break and my off table gunship arrived to destroy all his expendable stuff. All he had on the table was his CO and a recce unit. I did warn him to to come towards me. 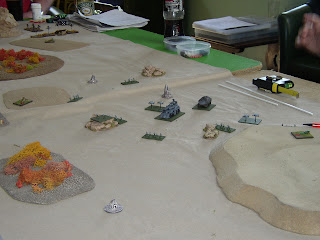 My Krays and Alan's bugs rush to contest the factory. 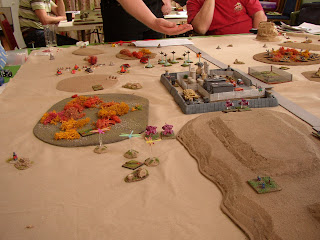 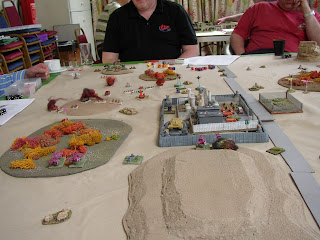 Gordon's Krays get pulse HVP'd by my gunship then flames by bug gunships. It's not pretty...for Paul's outmoded team. Alan gets a bug up into the complex to contest the factory and wins hands down on VPs so Pink is the colour of the day. 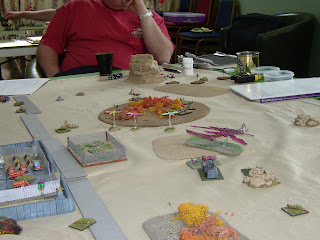 Small fast paced scenarios to build up to the finale later. Scenario as per BKC site but essentialy run arounf the desert and find good stuff before the prison screws get you. 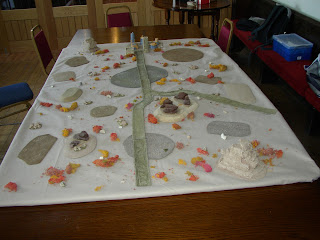 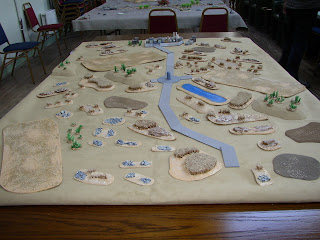 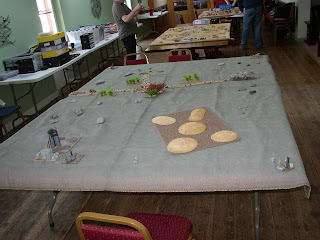 I was on table 3 vs Colin and his Gammoreans and Paul's renegade Krays. Colin obligingly head straight for my deployment line and save me having to move my reckon too far. I had a plan! 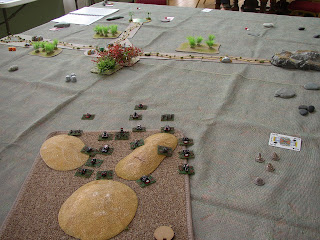 Meanwhile elsewhere on the planet fuels convoys attempt to break through. 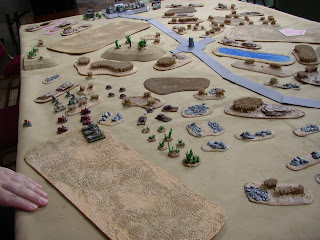 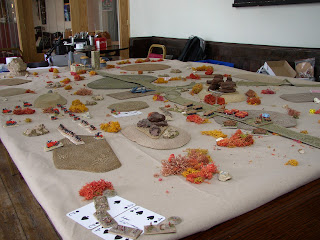 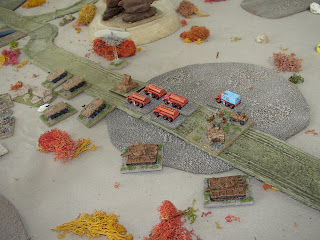 So Colin races to get objectives, runs past my recce who promptly advice me CO where to land the Teleporting  Karok Lander. Out pile a load of Krays and lay waste to numerous Gammorians. Worked a treat. 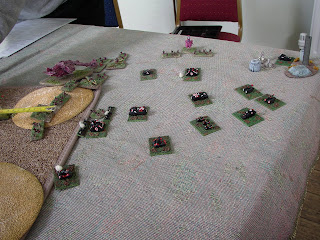 See how few Gammoreans there are compared to the first pic.... 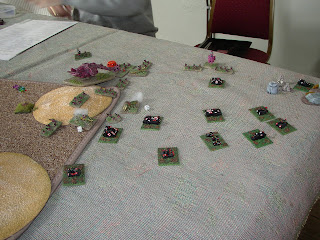 Second morning game and the same thing although different units for me. This time Mark lines up his troops in Napoleonic formartion... to which pulse weapons are lethal. Mark lost a fair few troops and learnt an important lesson on spreading troops. 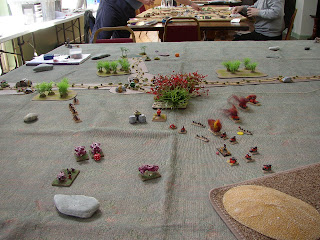 All the Junkers and Renegade Krays assault the prison complex and attempt to steal the Mothership and escape. However Renegades to a deal to survive and be allowed to leave the planet, taking with them Mark's Orange Junker clan. Leaving  poor mike and Colin to face the music. 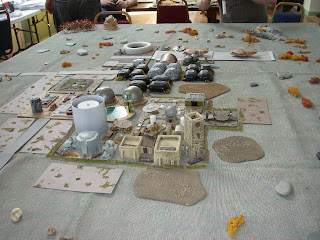 Mike obscures the defending bunkers but cannot stop the call for airsupport that destroys his army. 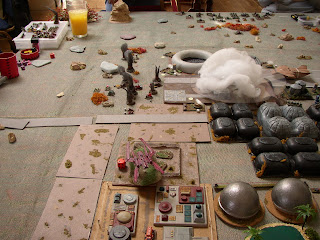 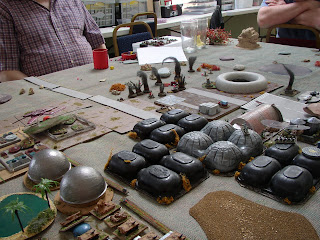 Mothership arrives at the end of the day. 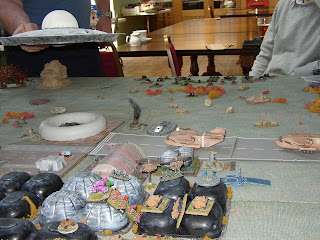 That's it. a Great weekend,  thanks to all and look forward to next year.
Posted by Steve Price at 12:09 AM