We had 2 FWC games at the clun on Monday 10th June, a fun little variation of a book scenario designed by Gordon.
Both played 'Out of luck in Reno', 1250 AP of Junkers defending, plus 250 AP fixed defences, vs 2500AP of Contractors attacking. Junkers have run out of fuel and must dig-in all vehicles (if any) around their base - a rocky hilltop village. This village (Reno) may have fixed defences and is in the middle of the table. Run game as per All-Round Defence, but:

1) Junkers may deploy ambushes.
2) Contractors have partial air superiority every round.

Gordon's reverse terrain rules caused some confusion for me over LOS but as it affected both sides' long range fire it more likely delayed the result rather that actively make a significant difference. Reverese terrain means the entiretable is soft cover other than hills (unless covered) and open terrain templates. This makes fewer points games last a tad longer and gives both sides a chance to actually do something.

KiwiDave ponders where to deploy his Marine Corps. 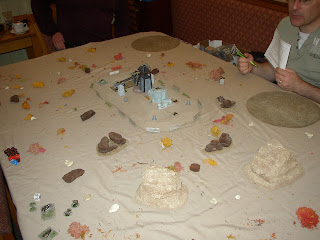 Graham and I attacked from opposite ends. I had the Krondal Legio whilst Graham had Euro-Fed French. 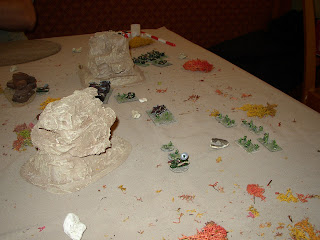 Grahams French move forward using the classical line formation so loved by French armies of old... if it ain't broke... 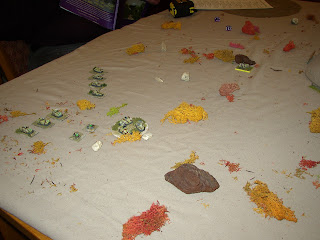 Dave struck early and ambushed me to take down 3 units for the loss of 1 (IFVs helped me out), his other ambusher got isolated. 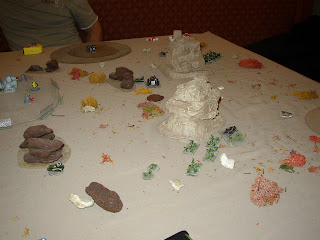 Dave used and infantry walker to up more of my troops but then it was toasted by Graham as it sauntered around the hill. Graham moved into closer range and poured fire into a bunker... When he was not failing Command Rolls that is. 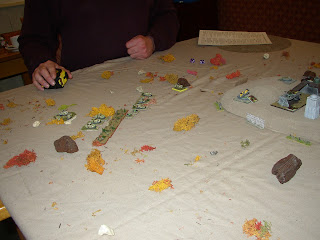 I used stout recon units to spot and call in artilley which suppressed sentry guns.  In a not often seen FWC moment I manouevred my towed guns into position and unleashed hell upon marines and sentry guns. Adding insult to injury I asked him to move them for me :-) 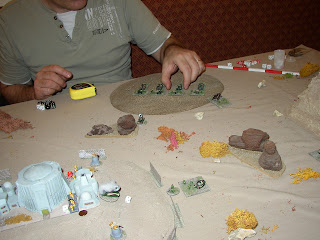 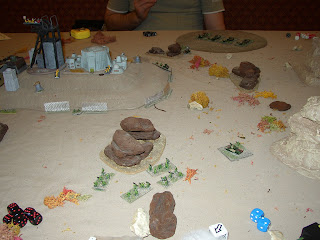 Graham continued to batter the poor bunker and Dave tried to move troops in to it to replace those lost. 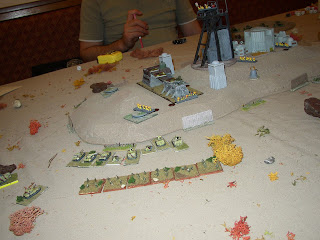 I eventually got some infantry up to the perimeter fence and started to move through (recce createda nice gap). Dave finally failed his break on turn 8 (he'd hit it some time before). 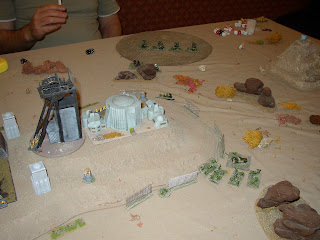 1) 12 turns for 2500 vs 1250 plus 250 defences are too many. 8 would be better to encourage movement, 3000+ vs 1500 could manage 12 turns.
2) Snipers are useless vs Marines. They generaly roll 2 dice less for suppression, even the officers roll 1 less so you need 2 snipers or claim rear/flank and under 1/2 range to get extra dice...
The other game saw Mark defend against Mike and Gordon, his report can ve found on the BKC forums in the FWC threads.