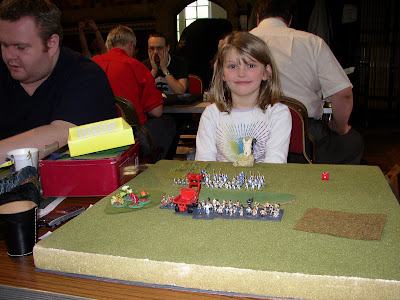 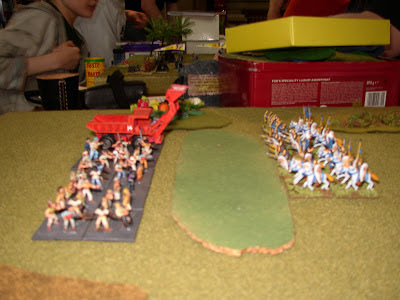 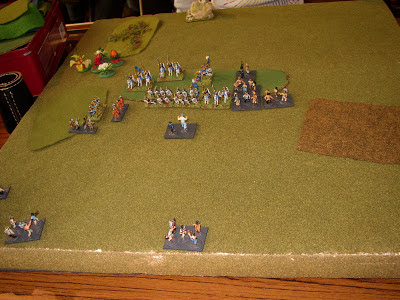 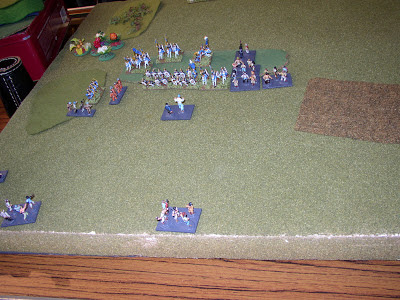 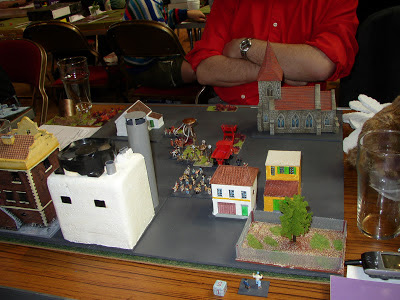 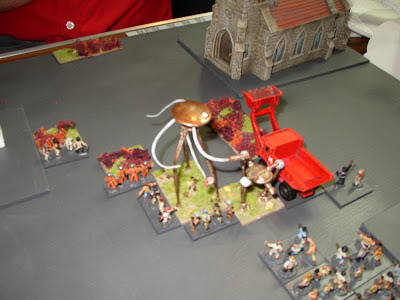 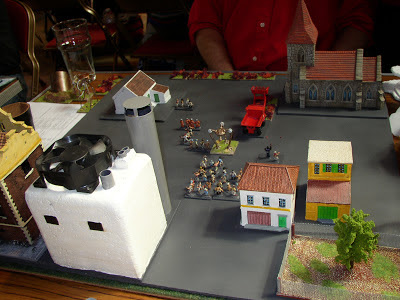 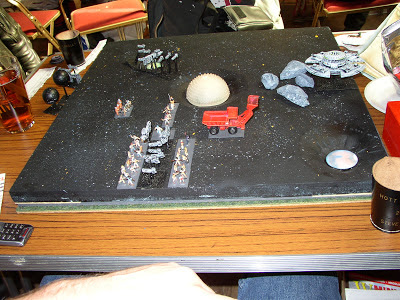 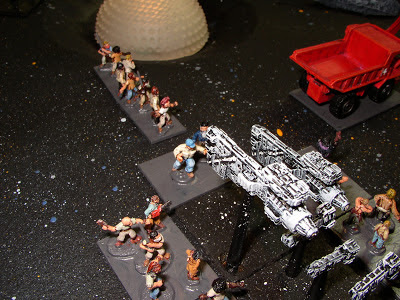 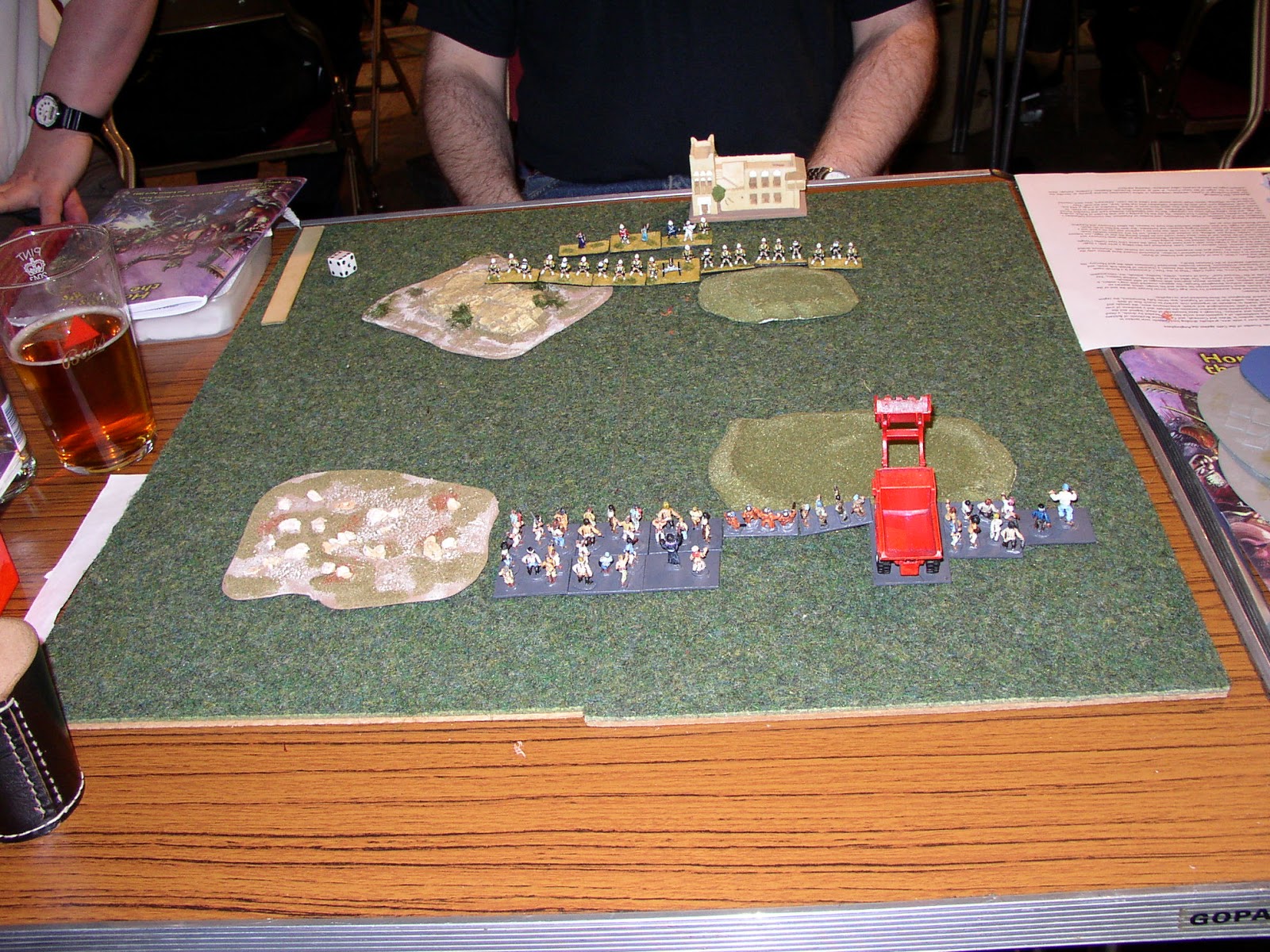 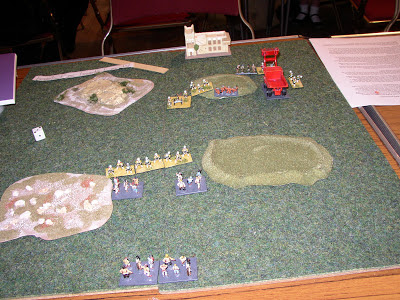 So last night I hosted our game as the usual venue was closed for refurbishemnt. We decided to do 15mm Colonials for a bit of light heartened fun using Battles For Empires v2; it's not out yet but the QRS is on the yahoo group and Chris has kindly talked us through much of it. I also had printed off the random event cards from http://www.angelfire.com/games3/jacksongamers03/colonial_card.htm which looked like they'd add something to the game.

The dastardly Dervish had captured some fine artilelry pieces from the British and planned to use them against river traffic and so prevent use of the river by the British. The old Coptic monastery (centre left of pic) had been identified as the location of the guns, accordingly the British mounted an expedition to recapture the guns and teach the Dervish a lesson. 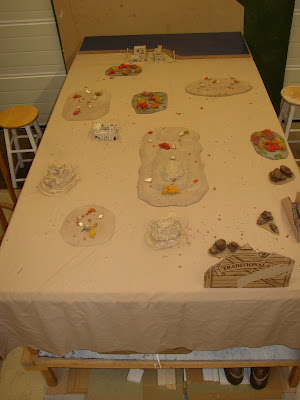 In charge of the Dervish was El Al with his two trusty lieutenants Al Shepaheed and Al Rojar, they had 4 cavalry units 5 skirmisher with rifles, 3 spear armed units and 3 smoothbore guns.

The Imperials were commanded by Colonel Unwin with 2 companies of British foot and 1 cavalry. He was assisted by Major Kiwi commanding the Egyptians, 2 Infantry , 1 cavalry and 1 arillery and also Lieutenant Manley who by co-incidence had the naval contingent, 1 unit of sailors, 1 unit Marines and a field gun on the paddle steamer.

The Dervish Decided to ignore the town and protect the passes to the old monastery; the Imperials when for a split attack with the Naval troops securing the town and docks whilst the Egyptians and British lines went for the shortest and supposedly quickest route. 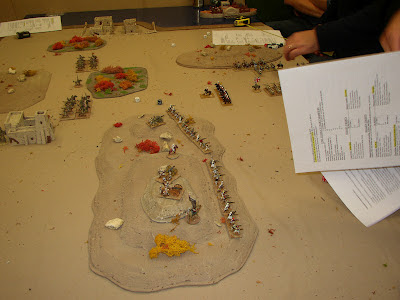 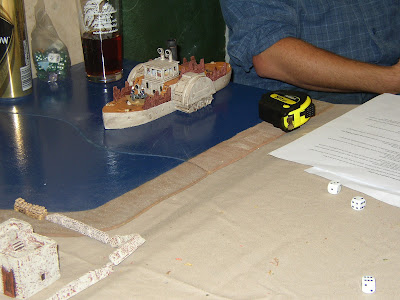 The Imperials aim for the quicket route. Far centre the Dervish cavalry cover the rocky hill and rough ground threatening the British cavalry. 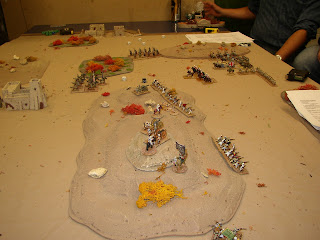 Dervish skirmishers disorder the advancing British line... then take a kicking for their trouble. 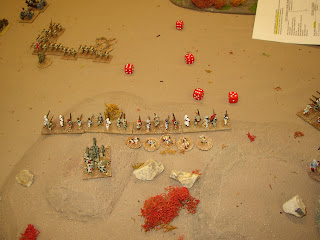 The Dervish cavalry are charged by Egyptian cavalry who were behind the British cavalry... they'd rode on past by this stage.  The Dervish had already taken hits from the gunboat to their rear when hit, they needed to roll big to do well in the combat..... Oops. 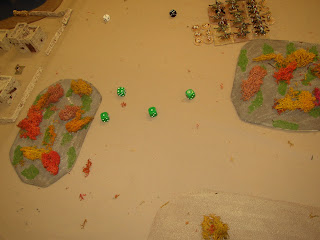 Meanwhile the British cavalry hairs up the table to take the monastery only to be intercepted by Devish mounted. Egyptian Infantry advance to support them. 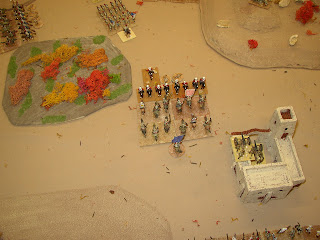 The Dervish throw in more units whilst the cavalry slug it out. Gordon Pasha, long thought dead arrives to take command of the Imperials for a turn giving them all +1 on Unit Conduct Chart. 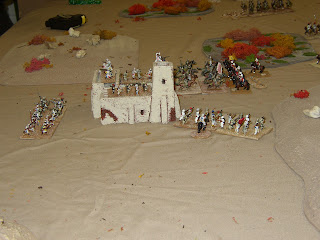 Britiah and Dervish mounted wipe each other out leaving infantry to finish the job. Meanwhile the British foot, after taking a kicking from Dervish artillery on the hill finish of the flanking Dervish. The Dervish got the Belch of Alah card and gained an old 12pdr gun to help them out on random events. 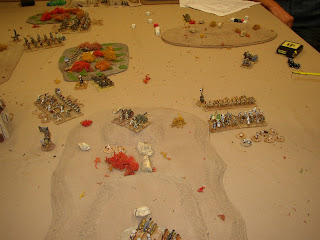 Naval contingentt finally disembark...but Binky Pasha now turns up and takes command. The bumbling bafoon gives all Imperials -1 on UCC and they suffer for it. 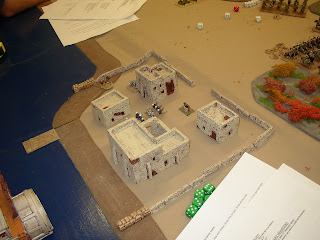 Egyptian cavalry and Dervish destroy each other. 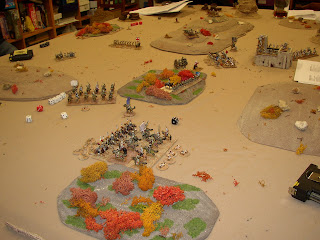 The Naval boys advance out the town but there's no one left... 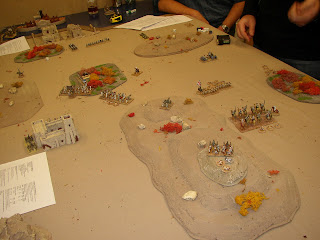 The last Dervish mounted go for a valiant charge, both units die to a man... 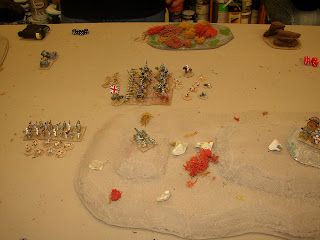 Dervish foot sally out to charge the Egyptian  infantry led by El Al himself!! 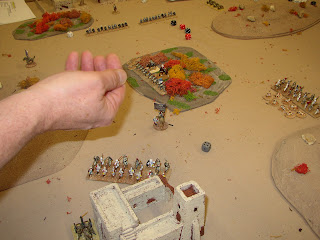 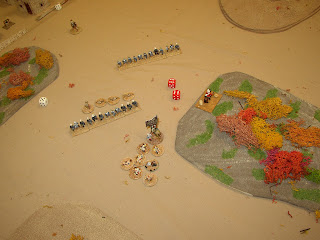 So in the end it was more or less a draw, with both armies almost wiped out (army morale is so passé), the British made it across the board although in hindsight might have spent a couple of turns to take out the Dervish artillery and wait for the Naval contingent. They only had the Egyprian arty, 2 naval companies and the naval gun on the boat left, the dervish had 3 units of artillery, 1 unit of massed natives and El Al was dead.

We are still not sure if we are playing it right as it's based on the QRS and various notes from Chris. The Dervish artillery seems much more effective now since all hits are kills (each unit can take 8) and they are carried around with you; in v1 where units could take 4 kills only the Dervish smoothbores generaly only did 1 hit which caused disorder and no kills, only if they were lucky and you were in close range did you suffer 2 hits to cause a kill.

Either way good fun all round.
Posted by Steve Price at 7:58 PM No comments: