For Monday 1st July weekly game we ﻿decided to try out our new BFE  v2.0 rules. Truth be told we'd effectively been using them for a while since we'd had the latest updates via the yahoo group but it's nice to feel you are playing them 'proper'.
We elected to play Maiwand from the 2nd Afghan war, the only trouble being I had no figures for Afghans. I did however have a recent purchase of Indian Mutiny stuff so I rebased that and with some suspension of disbelief I added in some of my Sudan figures and we gave it a go.
The scenario was from the yahoo BFE scenarios files section by Nick Stern.
We had 4 player and I acted as umpire, Dave and Shaun took the role of the Britsh Imperial force whilst Alan and Rodger were the Afghans. Below is the British column all pristine... 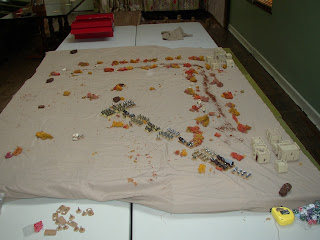 We assumed that as the scenario did not specify then the rules for native artillery applied and they were to start on table. Needless to say the Afghan players then deployed them in a Grande Batterie. The British realise this wouldbe lethat so quickly manouevred out of column 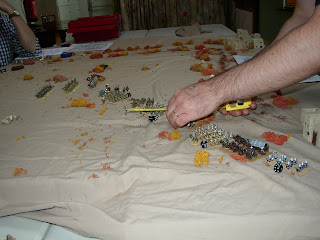 The Grande Afghan Batterie gets some infatrny support from reserves as the artillery wipe out a British cavalry unit on turn 2. 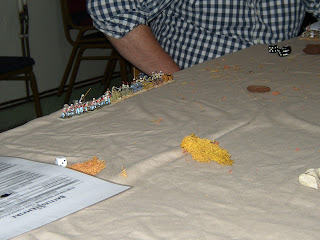 The 'Ghazi' swordsmen race up the smaller ravine tooutflank the British. 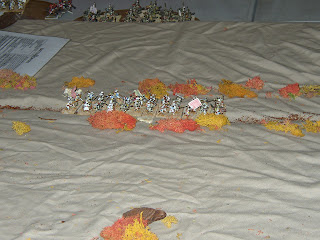 Afghan forces start to arrive en masse. The artillery continue to pour fire into the British. 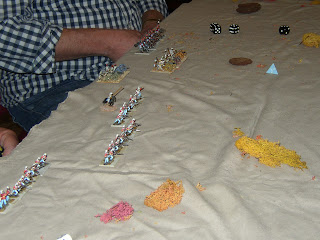 Finaly the British sort out their line but have managed to block their own artillery. 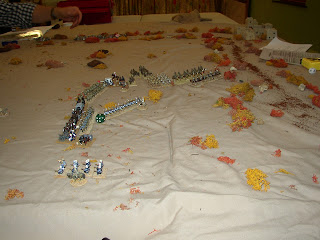 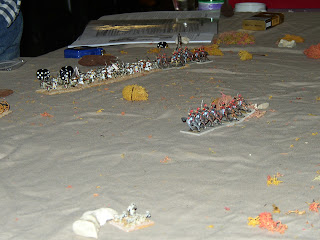 Their hope is to exploit what could be a massive gap at the join of the British lines.... Oh no, the other Afghan general takes pity on the British player who is a BFE novice and the gap is closed. Meanwhile The British now manage to return fire and start causing casualties to the Afghan regular infantry. 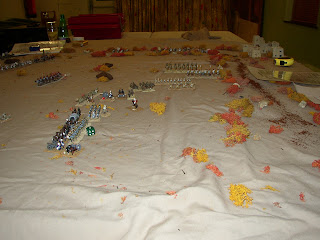 The Afghans pile in and it all gets messy as the stout British lines rebuff the Afghan assaults. Sadly it's all too little too late and the British hit their break when the Afghan artillery account for the last required unit. 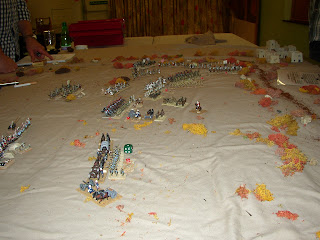 A fun scenario but the British are on to a loser. They can merely hope to hold for longer than their historical counterparts. Today they failed.

V2.0 of the rules worked well and with 8 kills per units and all hits a kill it gets very bloddy very quickly, no time to retire units out of the way if they are looking peaky, just hope the enemy breaks first and get on with it.
Posted by Steve Price at 11:44 PM No comments: