For our club’s regular Monday game I ran a Sudan version of the Battle of Intombe River on 19th Nov 2012. The chap with all the Zulu stuff was otherwise engaged and as all I have is the Sudan stuff it made sanse as it was within period.

We use Battles For Empire for out Colonial rules by Chris Leach as they seem to produce a game that for us feels right for the period. There is a yahoo group for discussion on the rules and also said scenario in the files section.

I set the table up as per the scenario, the scenario allows the Brits some leeway in deploying tents but for a first go we did it ‘properly’. We used a 6by4 table with 15mm figures, my Imperial are based 3 to a stand and each stand is 3cm wide, natives are 5 to a stand and each stand 6cm wide. Each unit has 4 stands meaning an Imperial line (4by1) matches a massed foot formation (2by2). Each pair of tents represents a commander or unit for the British, the rocks in the river show the location of the ford. 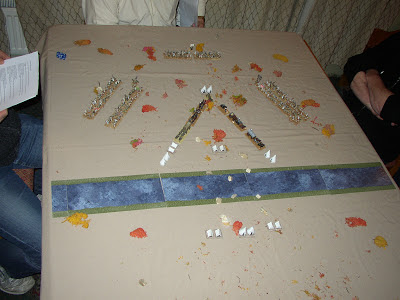 Alan Millicheap led the Dervish on the left, Rodger Williams running the centre and Alan Paull of Suprised Stare Games on the right. Shaun Mutton of Dreamholme Scenics took the British north bank, a hospital pass if ever there was one, whilst Graham Bevan took the south bank; their mission is to get of the south edge of the board with 3 units (so get 1 off the north bank to the south), the dervish just have kill 4 units thus prevent 3 escaping.. I umpired, took pictures and generally had a great time.

The Dervish deployed right up tight to their allowed distance on to the table so only cataclysmic results would prevent a historical opening of the battle. The Dervish now won the first of many critical initiative rolls and charged.

Initiative in BFE can be critical at certain times in that you may want to get away or force your opponent to take his Unit Conduct Chart (UCC) tests before you. In this case it’s important as the Brits have to try and wake but if the Dervish move first they can be on to Brits in turn 1 (which is historical). Sure enough Captain Moriaty outside the apex of the laager was overrun in turn 1. A unit on the left flank was also hit with a rude awakening whilst the rest of the Dervish tore through the larger. The Brits did manage to wake the units on the south side, one in the middle of the laager and one on the left flank.

The Dervish start with 10 units out of 30 on the table, dicing twice for reserves each turn from the 2nd onwards; I used the Zulu reserve charts so we could replicate the Zulu Chest, horns and Loins tactics that the scenario dictates. As it happens we could have saved time and given all the reserves to Alan as on turn 2 he managed to get 2 lots of 3 units on to the left horn for himself (top right of picture). 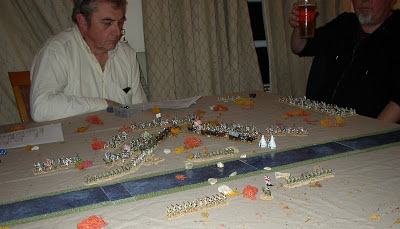 This continued for most of the game until the last couple of moves when the Loin chart was finally activated and Rodger got a couple of units in the centre. Alan Paull got no reserves but his team graciously let him have some of theirs.

Whilst the Dervish now poured through the laager one British unit take the sensible precaution of backing off to the other side of the bank. Meanwhile the loud screaming and gunfire appears to be insufficient to wake a unit of British. The British on the south bank elect to retire to try meet their victory conditions. 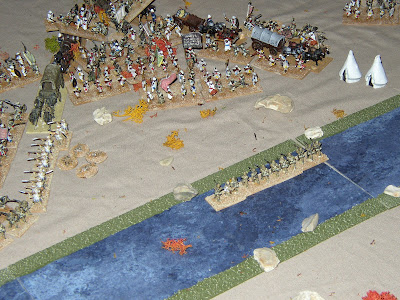 Turn three see one British units wiped out whilst the one on the far left comes under attack. The British on the right finally wake after the Dervish actually clamber into the tents and set about. The unscathed unit continues to negotiate the swollen ford. 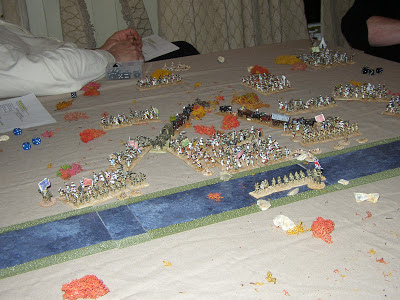 The sleepy British lose their unit on the right but the south bank units realise they only way to win is to ensure 1 unit gets of the north bank so they push back up to provide covering fire. The British to the left see off a unit of Dervish as the initiative roll becomes all important again. The Dervish are no in a position to catch the unit in the river if they move first. 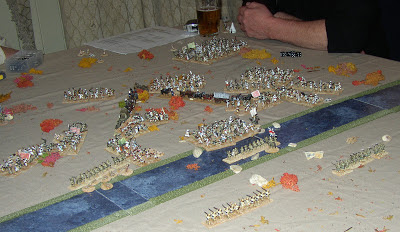 The Brits win the initiative and the unit makes it over the river to join the other 2 units. Meanwhile the last British unit on the north bank is dispatched. And the Dervis pour across the river.

Interpenetration in these rules is limited so it’s important to ensure commanders are in the correct place to affect UCC rolls and the order of picking units requires some thought. The mass of troops often means a log jam for the native troops in these rules and this scenario was no exception for the Dervish trying to follow the Brits across the ford; co-ordination is key. Of course it wasn’t help by yet more reserves arriving at the Devish left horn, all trying to get to the river.

The trick for the British is now to stall the Dervish by having the lead units fail UCC rolls and paralysed as a result, this would mean the Dervish would be stuck and those behind also stuck. Catch-22 is that to do this they need to score hits and accumulated hits result in destruction of the unit thus clearing the way for other units to plough through. So it is a meat grinder but actually quite tense as if the Dervish can contact the retreating line and cause hits the British will crumble due to attrition.

As it happen the Dervish now get a unit across and crash into the line . 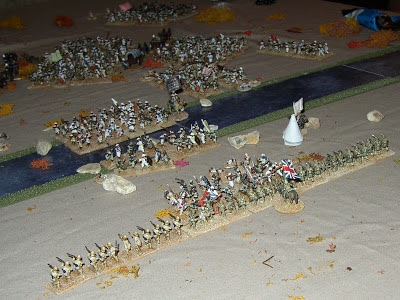 Volley fire sees said unit trashed at no cost to the British line. 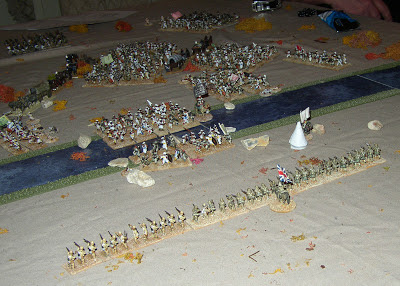 Calamity now for the British. Using commanders to boost the UCC result the Dervish get 2 fanatical charges as they exit the river and they smash into the thin red line. Desperate point blank fire and hand to hand combat see both the fanatic charges destroyed but the central British unit took a beating and is on 7 hits, 8 and it gets destroyed. 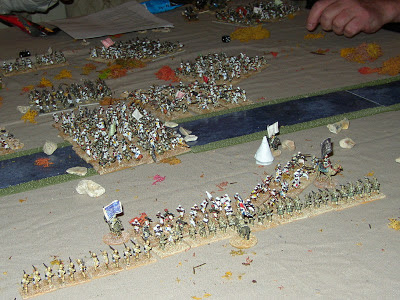 The British kept gradually retreating but did not take measure to protect the damage unit, mind you, with 7 hits it would struggle to get a decent UCC result to escape anyway. 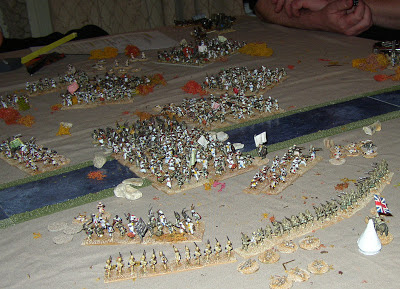 Those units are shot down in an astounding round of firing by the British and destroyed. However it reopen the space for more Dervish to race forward. Meantime the Dervish have instigated a ticketed queuing system on the north bank so that the fording is orderly…. 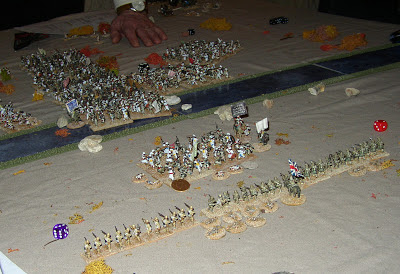 More devastating fire decimates the Dervish but there’s thousands of ‘em and they are now out of the river in force…. 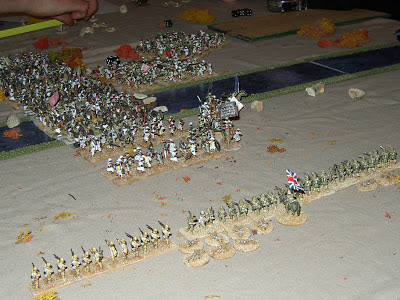 And eventually numbers tell. Despite taking 7 hits on the way in a Dervish unit hits the central British and scores that all important last hit to wipe out the 4th unit. 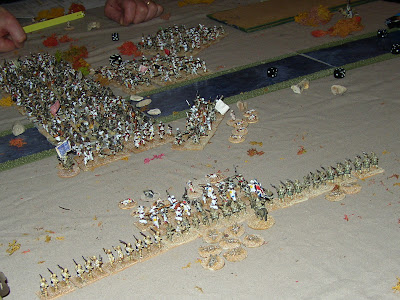 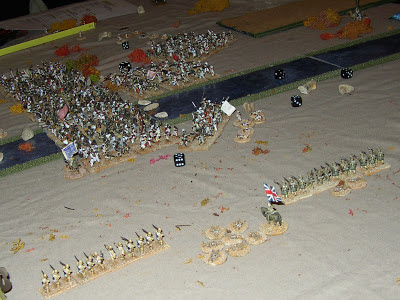 So a win for the Dervish and pretty much spot on to the historical result. In reality some troops did make good their escape but not thanks to Lieutenant Harward on the south bank who ran off and left them, nor Captain Moriaty whose incompetence got him killed right at the start of the battle.

The scenario does have to potential to look like it’s a case of mowing down natives but no more so than playing Rourke’s Drift. The odds do not favour the British at all and they need the first initiative and to get everybody awake then they could possibly sacrifice 2 units on the north and escape with the rest, but that’s a lot of luck needed. Re-positioning the tents and making the laager effective (as was recommended historically by Major Tucker) would give the British a much higher chance.

The bottleneck of the ford means  the natives need to be organised as they cannot deploy on the south bank – I did wander about this as the scenario does not say, but I assumed as the river was swollen and that was the only ford about that the natives were restricted to the north bank.

All in all another good fun game brought to you by the Berkeley Vale club.
Posted by Steve Price at 8:40 PM No comments: