Every year the Berkeley Vale club pop down to Plymouth and attend PAW, this year was mo exception and I entered the 25mm FOGAM tournament. 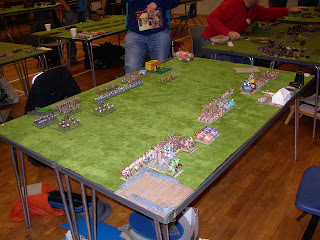 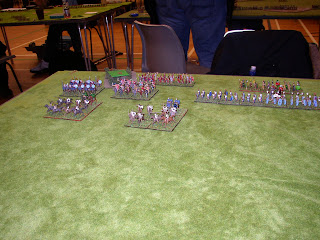 Matt delays with his LH whilst I push forward, his battle line scramble to re-align in the centre. 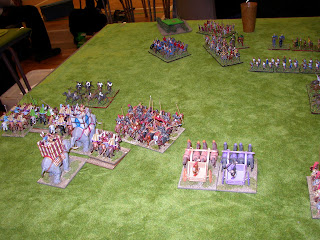 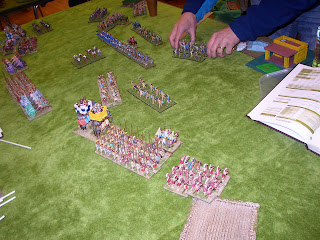 My left catches the enemy cavalry. 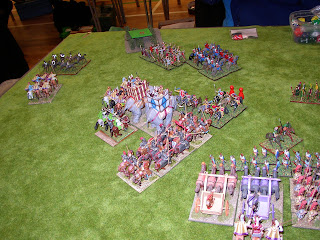 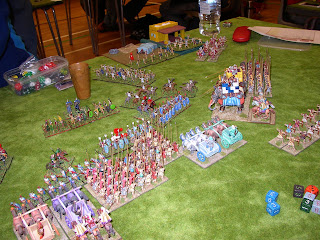 The elephants batter through 1 cavalry bg and hit the next. 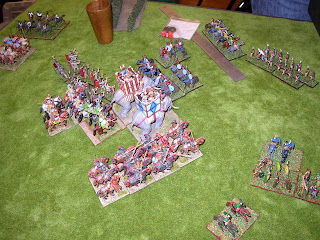 We have the village and the camp Sir! 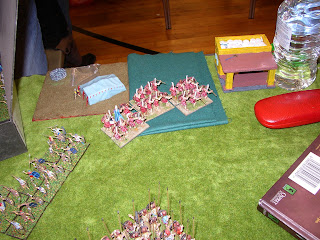 Game 2 vs Richard Jeffrey Cook and his Mayans. 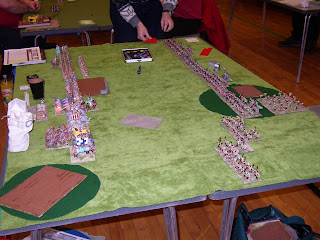 Dithering leaves me in a mess. 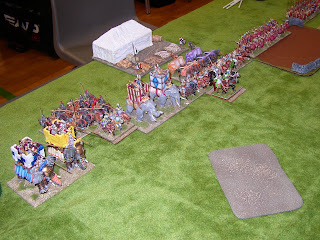 Penny packets go in. Don't ask why my Sc Ch are out onthe left, I've no idea. 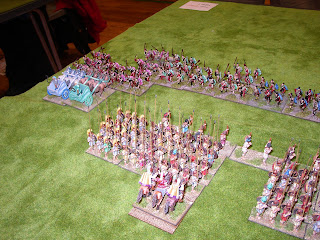 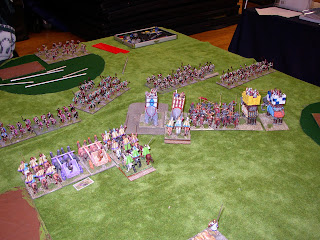 Shooting takes it tolls as we hit the line of Mayans. 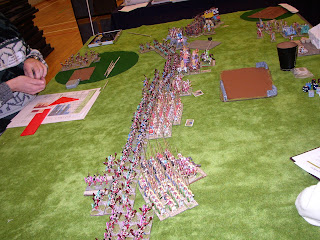 And promptly lose along the line apart from the Cats that break a bg of bow. 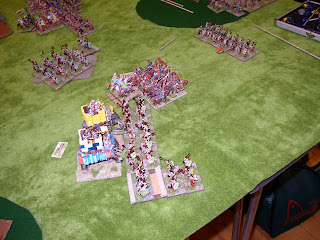 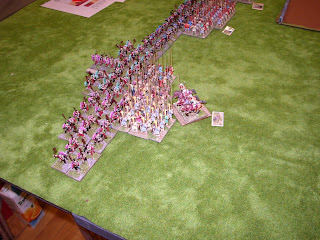 It went rapidly downhill after that but I resolved to learn from the mistakes.

Game 3 vs Neil and his Ancient Brits. 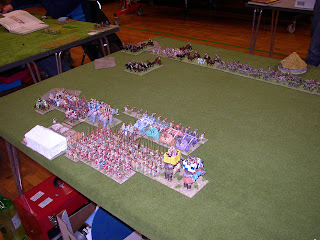 Opposite is just a bunch of hairy barbarians. 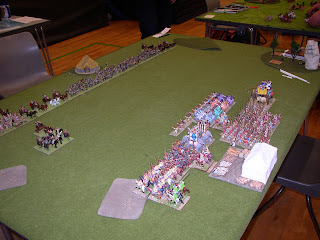 Neil skirmishes with cavalry and LH whilst I trundle forward 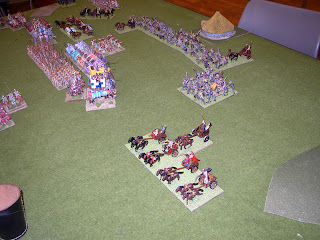 LF tease the MF in the centre, Sc Ch reasy to pounce, pike behind. Both companion bgs work to keep fending the LH jav from the elephants. 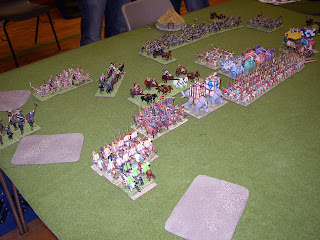 Neil's view of my army. No wonder he needed a fag break. 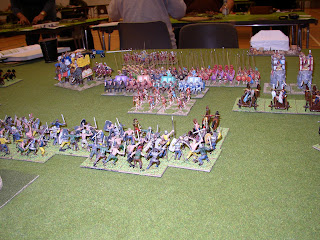 That gap between chariots and MF is just under 120mm so when I charge I hit both his bgs and will not conform. It's genius and I'm supported by the Thorakitai too! 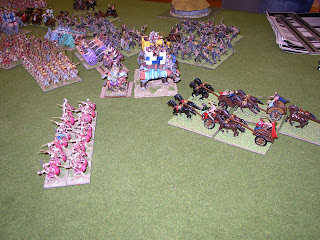 In the centre hhis Impact MF charge my LF, I evade and he plows into the orange and purple ScCh. Another genius move. And the pike are supporting. It's a Seleucid dream, what can go wrong. 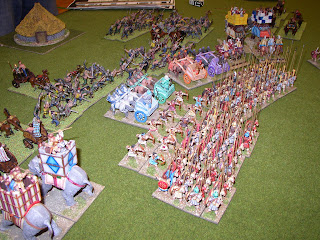 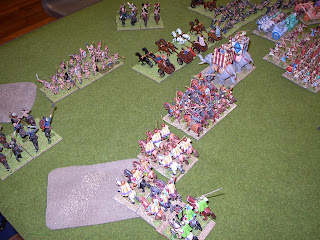 Line are still tight, on the left I have companions and cats hitting the elite MF, I have lance and MF in the open... what can go wrong? 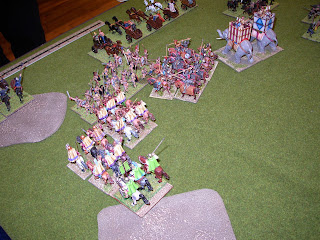 Well, everything it turns out. His MF go fragged to my Sc Ch but rally up in the 2 turns it takes my pike to advance into the gap left by the Sc Ch going in the JAP. The companions lose to the elite MF and the other companion bg break from 3 CT failures after javelin fire even needing 5+ to hit and I'm elite so should rally..

The one bright spot, my elephants and Thorakitai frag his MF. Big Whoop. 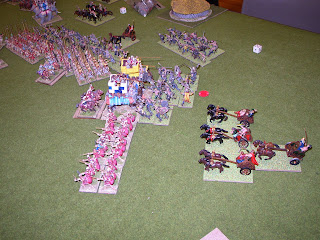 I did everything right that game except lose nigh on every impact, then fail CT then lost melee then broke down the line. There are no more picture because there was no more action, I just lost every subsequent combat and the army broke in minutes.

And then the day got worse.

I deployed wide but not to bad. It was open terrain and I was worried about flank marches. 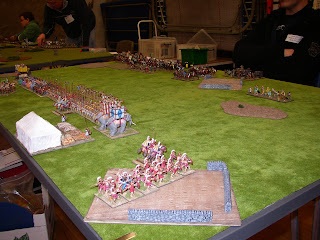 I start to turn the pike but it's slow. 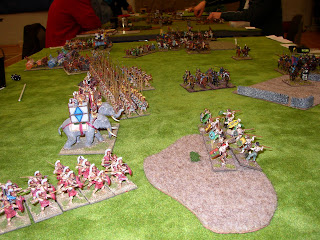 Overkill to defend my right but the pikes would never reach the left so might as well. 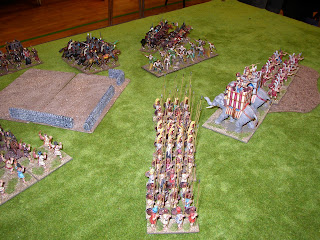 I re-arrange my left to fight off his hordes of cavalry. 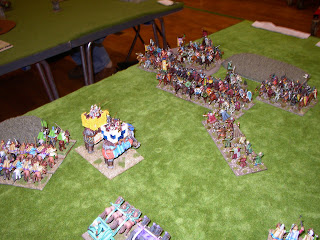 At this point it almost looks ok. 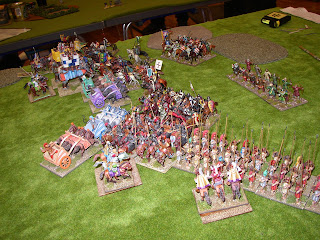 My cats did route the bg opposite them but... My Companions either broke or died to death roll (2 base bgs!!) leaving the elephants and Sc Ch todo the job but they too failed.

I gave in to the will of the Gods when my Thorakitai on the right lost Impact and dropped then I rolled double 1 on CT for losing melee despite being a POA up and overlapping the enemy in melee (even dice numbers). I'd lost 8ap out 9 and lost the will to bother anymore. We finished the charge by my cats into a flank of his cavalry and I got an extra ap for them going to frag'd. Real big whoop.

So the moral of the sory is never take ScCh, never use companions in 2 base bgs as battle line troops and don't be so keen to watch the rugby as to screw up your deployment on Saturday afternoon.
Posted by Steve Price at 11:14 PM No comments: