This year the Berkeley Vale club went for 2 Christmas games, firstly we tried a large Frostgrave, quite adventurous (see what I did there) with 8 players for our first game and good fun was had by all. Our second game was Chariot Racing and below is a brief write-up and pictures.

I've been looking to do a fun fast paced chariot game for some time and came across these rules recently - Fast Shuffle Combat Chariots. It uses 2 or 3 decks of  standard playing cards to generate initiative, movement and combat, so luck does play a part. I'd like to say it also means the luck evened out over time, but we are gamers and we all know that Lady Luck is fickle and has no greater joy than ensuring the luck is very uneven.

They are easy to learn (Walt the author regularly uses them at conventions), bloody and fast. Perfect for an evening's entertainment.

One of our group happened to have a sheet that was used for 28mm Circus Maximus and with the lanes 60mm wide it was perfect. The horror was he'd nearly offloaded it 12 months ago as he'd not used it for ages!! 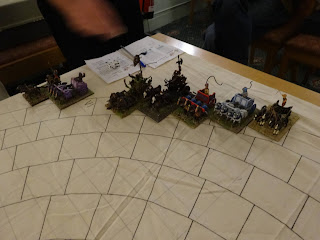 Lane 1 Stuart Clarke with his lovely 2 part chariot, all the leather work done too!
Lane 2 was our very own Wargames Personality Mr Dave Manley with a Seleucid ﻿number in lovely pastel blue.
Lane 3 had Dave Pike with the Roman entry
Lane 4 Steve Price (myself) with the Chaos Demons
Lane 5 Shaun Mutton with the Gobling King, the chariot still reeking of fresh varnish, literally.
Lane 6 Was a no show after being arrested for odd betting patterns.
Lane 7 David Nicolas with a second Seleucid entry
Lane 8 Andy Unwin with an Ancient British number driven by Boadicca's better looking younger sister. 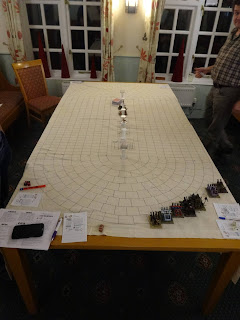 Full view of the track. 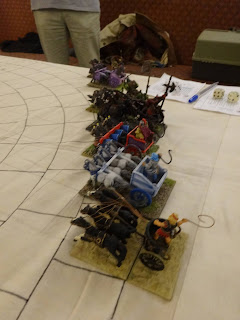 Mounts straining at the leash. 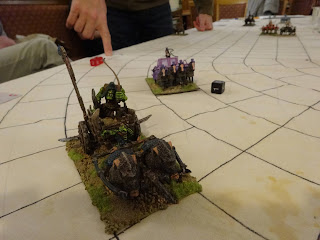 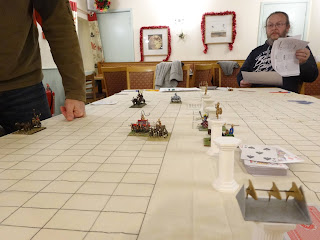 We even had dolphins to mark the laps!
After that it all got very exciting and I forgot to take regular pics. 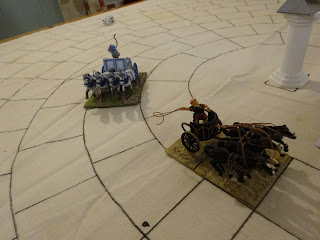 Stuart and Dave M take it tight but survive. 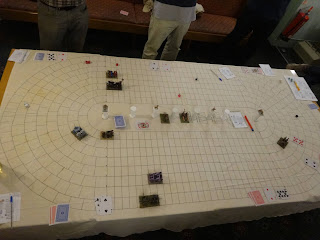 Andy has taken a massive lead and Lady Luck not only blessed him, but had his babies and moved in with him!!! 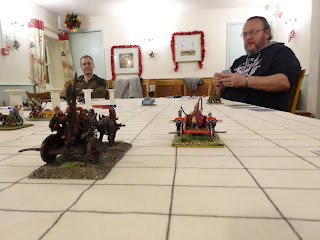 Steve and Dave P languish at the back of the pack, I say pack... that suggests there were others near us. There weren't. 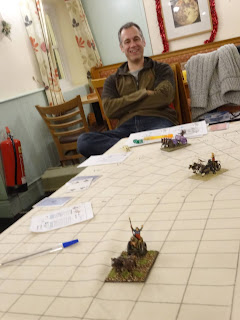 Andy sitting pretty in the lead. 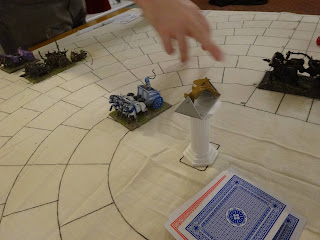 Dave M works out the likely hood of the Steve's Chaos Demon chariot ramming him... Do ursine animals defecate in arboreal areas? 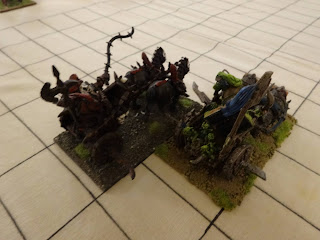 The Shaun's Goblin King is speared by Steve's Chaos Demon. It was a mercy, the Goblin chariot was a wreck and the driver having been dragged for most of the 2nd lap looked like Robbie Williams in Rock DJ video. 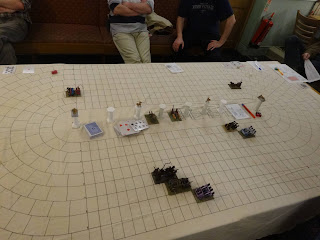 Dave N sneaks past the outside of the Steve &Shaun show 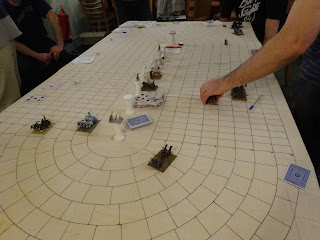 Andy coming out of the penultimate bend and about to lap yet another chariot. Dave P and Stuart tried to catch up on this corner and both got wasted !! 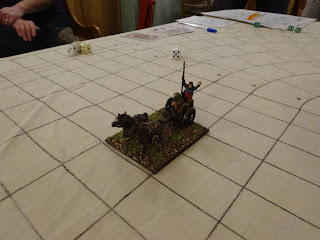 Arms aloft in victory Andy's protégé, Boudicca's better looking younger sister crosses the finish line after 3 laps. Not long after the last 2 surviving chariots limped home. The other 4 were wrecks.
So, great fun. Thanks to Walt for sharing the rules and his support with  few queries and thanks to my fellow racers for their company. It was a hoot. More in the New Year.
I'd transcribe Andy's victory speech and Thank You List here but I think there's not enough space left on the blog servers.
Steve Price.﻿
﻿
Posted by Steve Price at 9:41 AM No comments: