The latest in our adventures with Warband, the new fantasy ruleset from Pendraken Miniatures.

We play in 28mm on a 6ft by 4ft table as it's what we have. Our Base size is 120mm by 60mm, so 2 standard dbx Base with a second row for infantry. Sabots are easy enough if required. Dave uses a mix of his Saga individual figures and FOG bases.

The Dwarven host arrayed. My Dwarves were all originally based for HOTT but I like the large Base vignette idea with the dice markers. This army has a top general(formed, resolute, shieldwall), 5 warriors, all resolute and shieldwalled, 2 had hill walking and the other 3 were formed, an honour guard, also resolute, formed and hero. Finally a pesky gyrocopter filled out the army. 8 unis only! 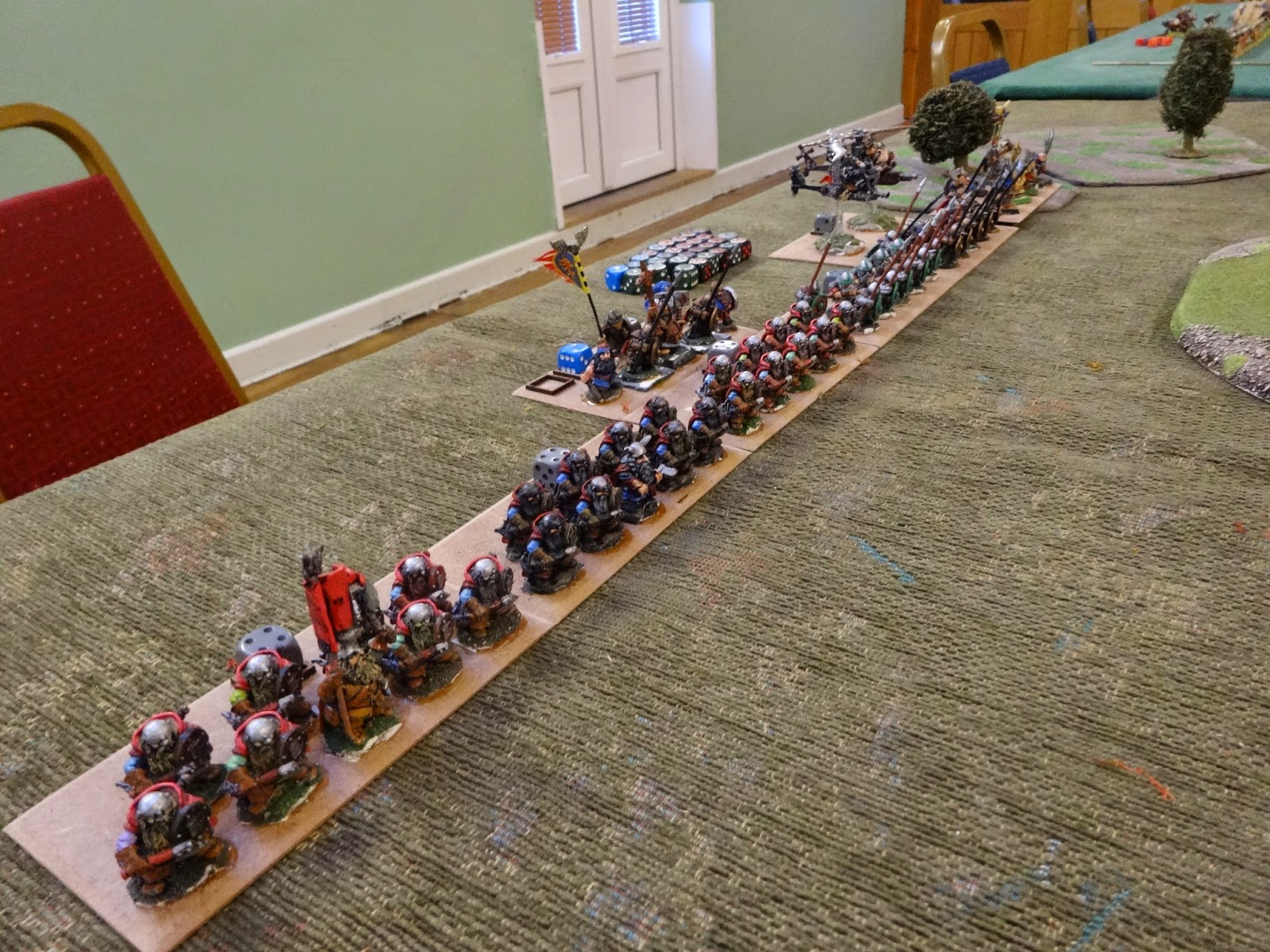 Kiwidave make final adjustments to the Dragonmen battle line. After previous unfortunate kickings of sundry mages and Generals we both put ours in the 2nd rank. 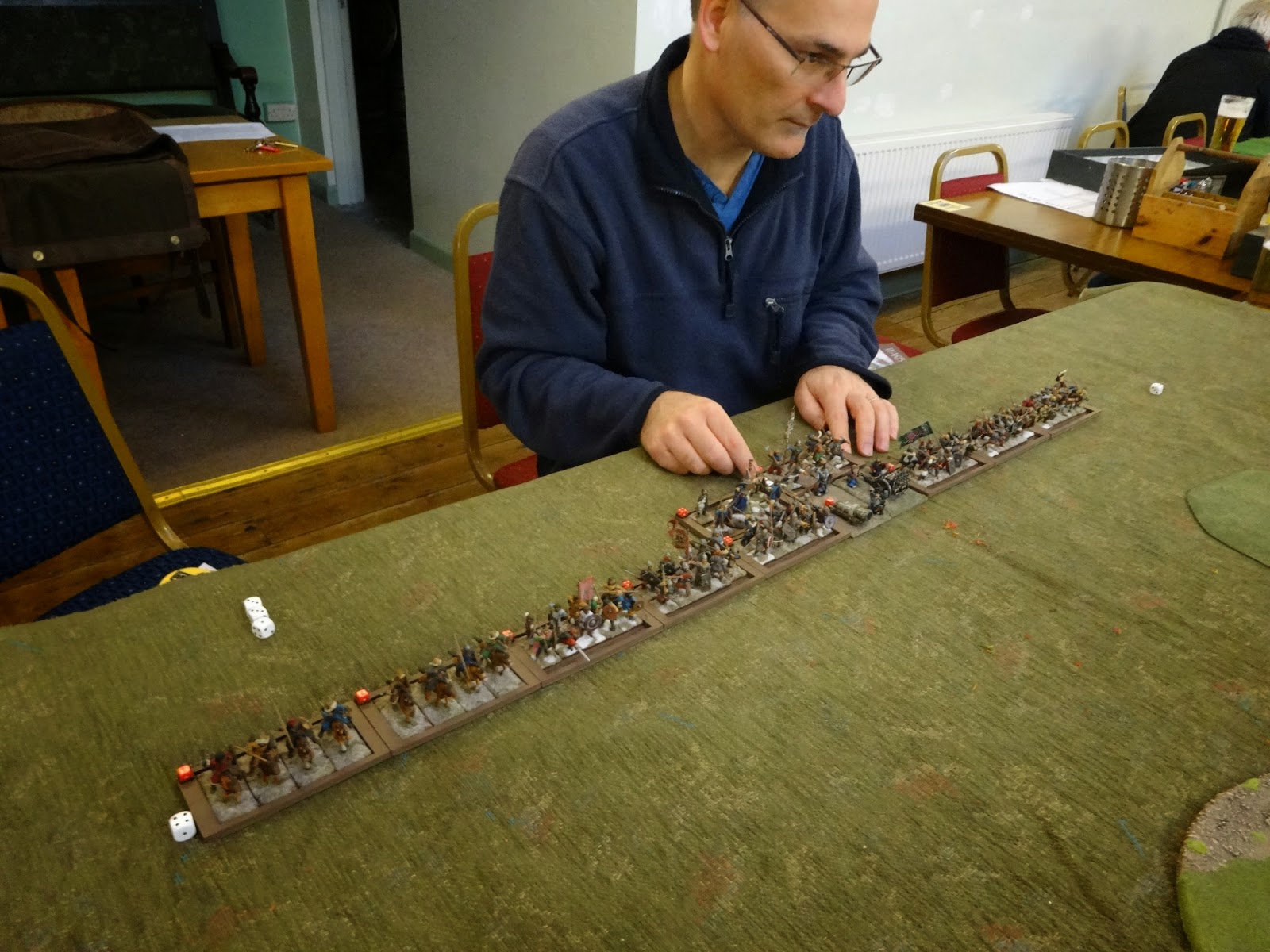 My general. Poor picture but I finally bit the bullet and demounted various HOTT bases to make up a suitable general. He stands amid his personal guard with his entourage around him. 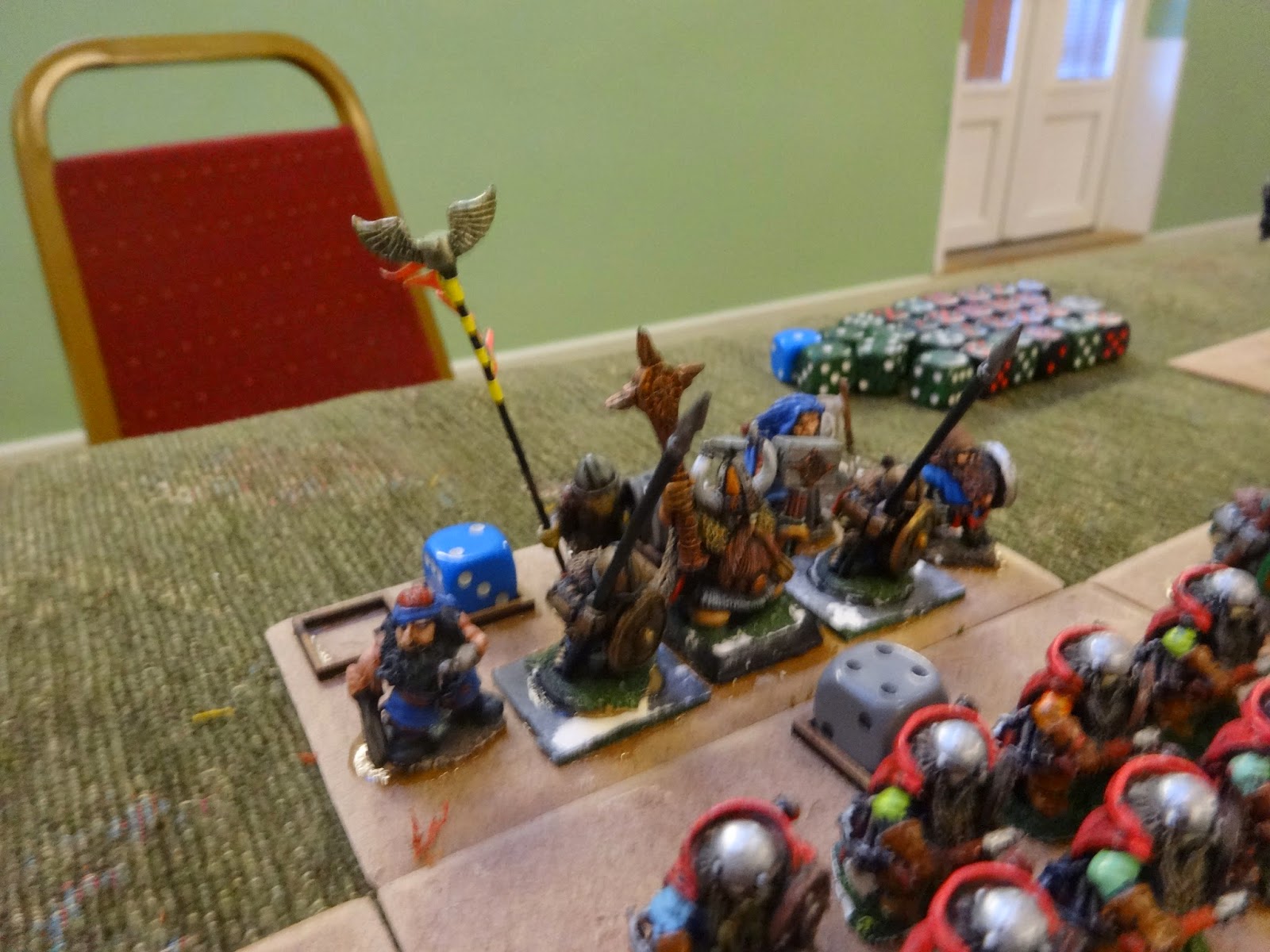 The filthy Dragonmen have hired some mercenary Dwarven artillery! Oh ok, I lent them to him. I'll rebase them too soon. 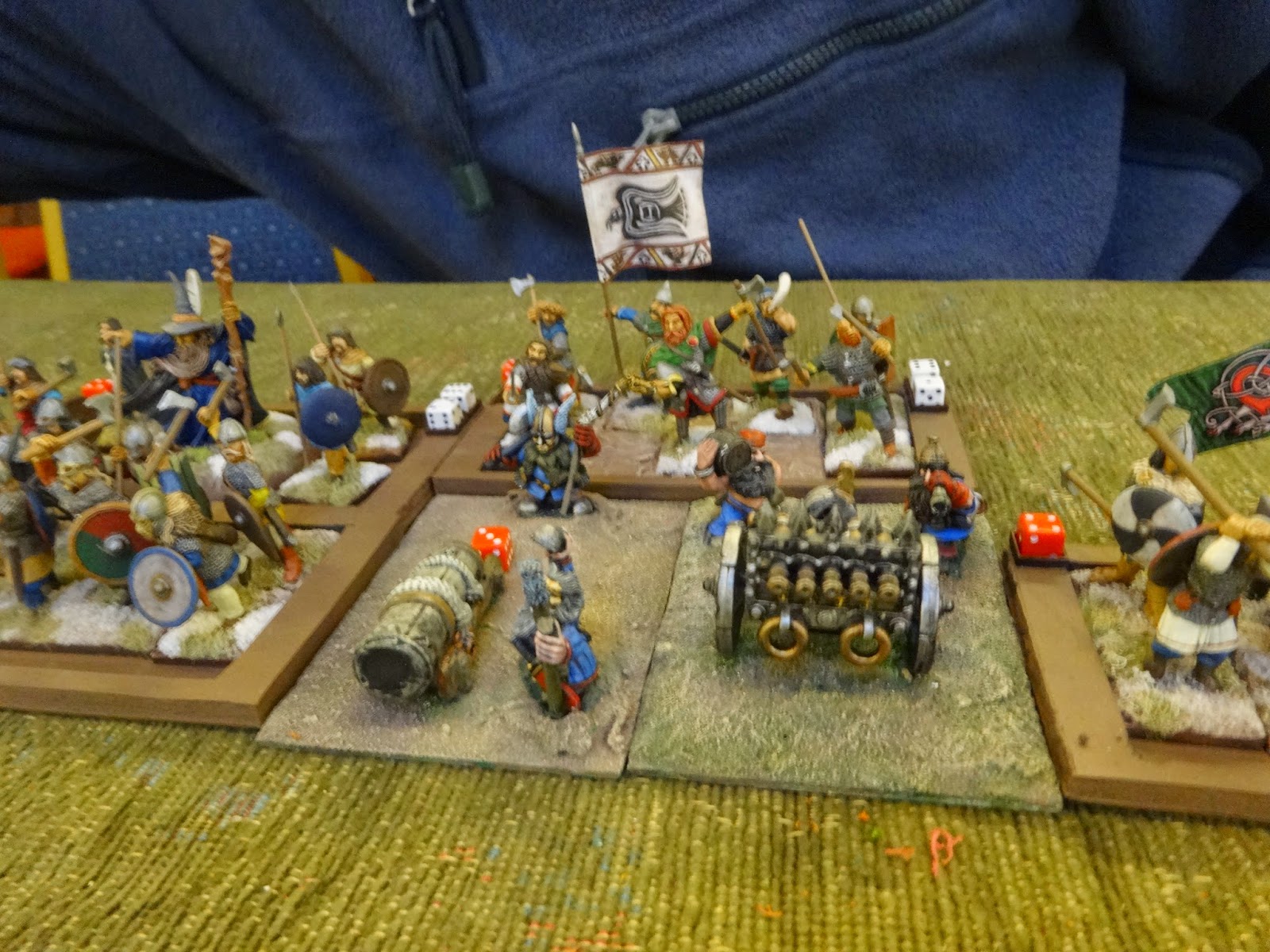 The Dwarves open procedings and push towards cover to avoid the turncoat artillery. 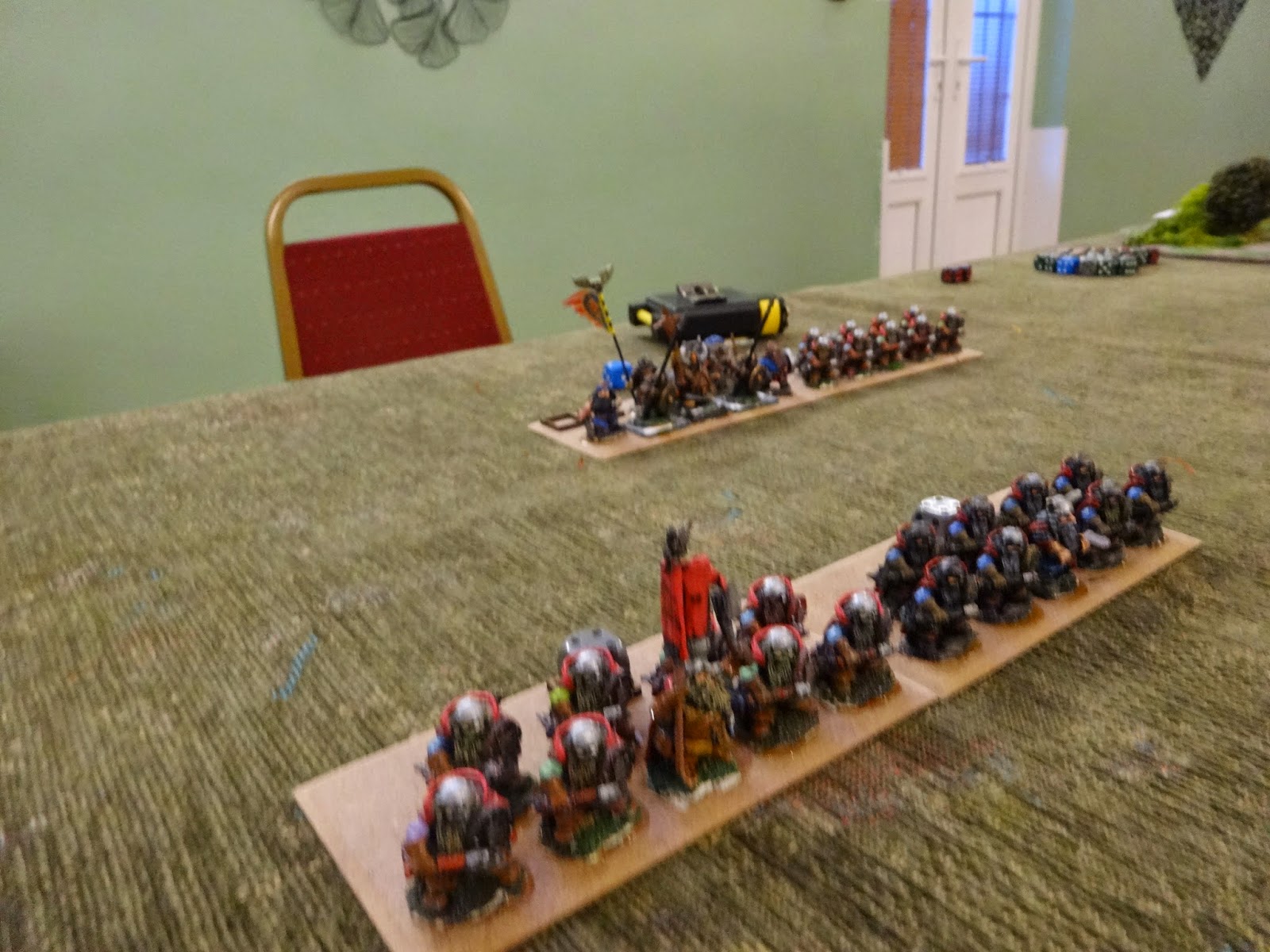 The hillwalkers go hull down on the hill as the gyrocopter hovers overhead. The honour guard move to cover the left flank. 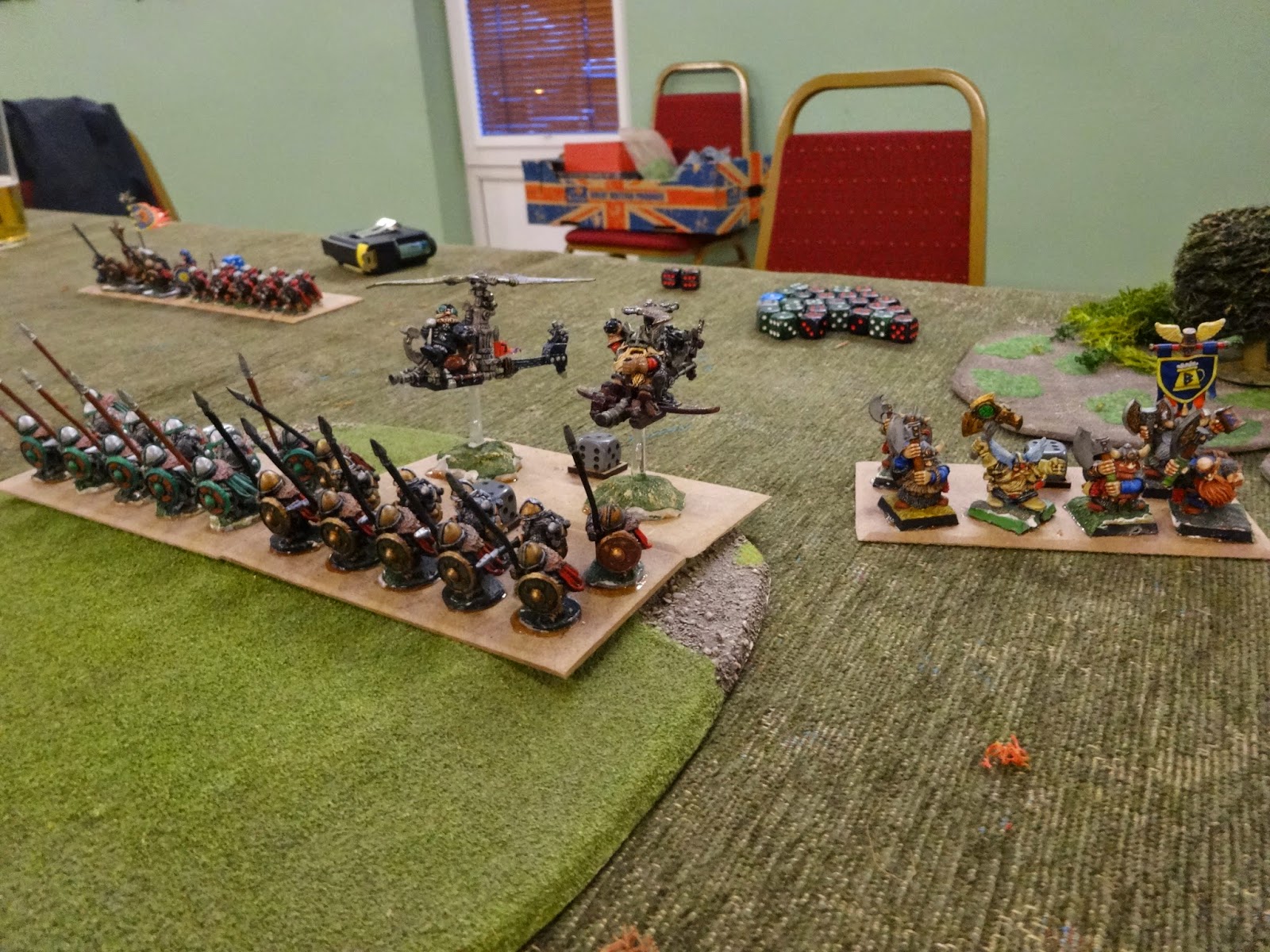 Meanwhile on the table nwxt to us the war mammoths hits Andy's Elven line in an introductory game for Mike Shepherd. 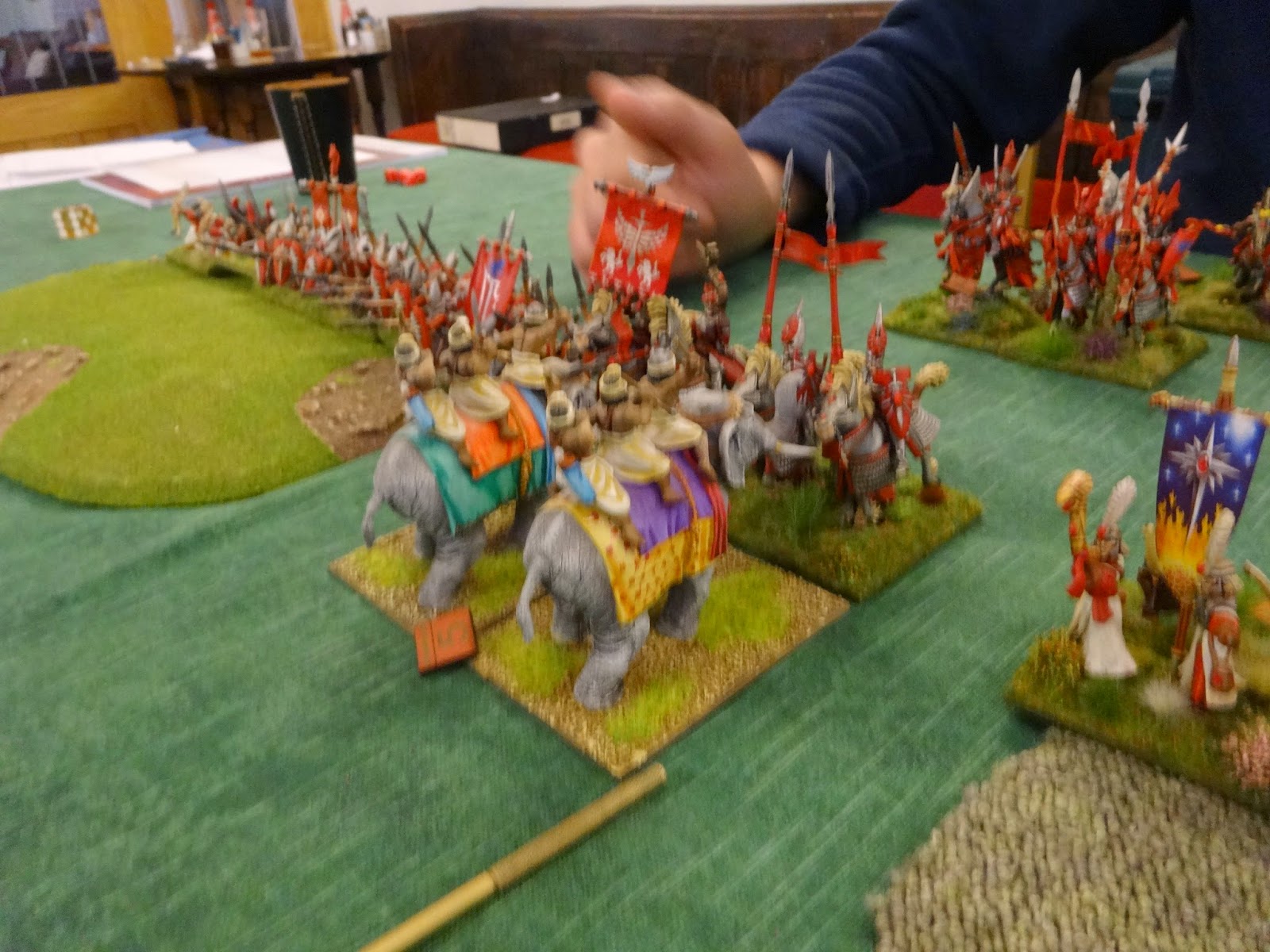 The Dwarven right makes for the hill. 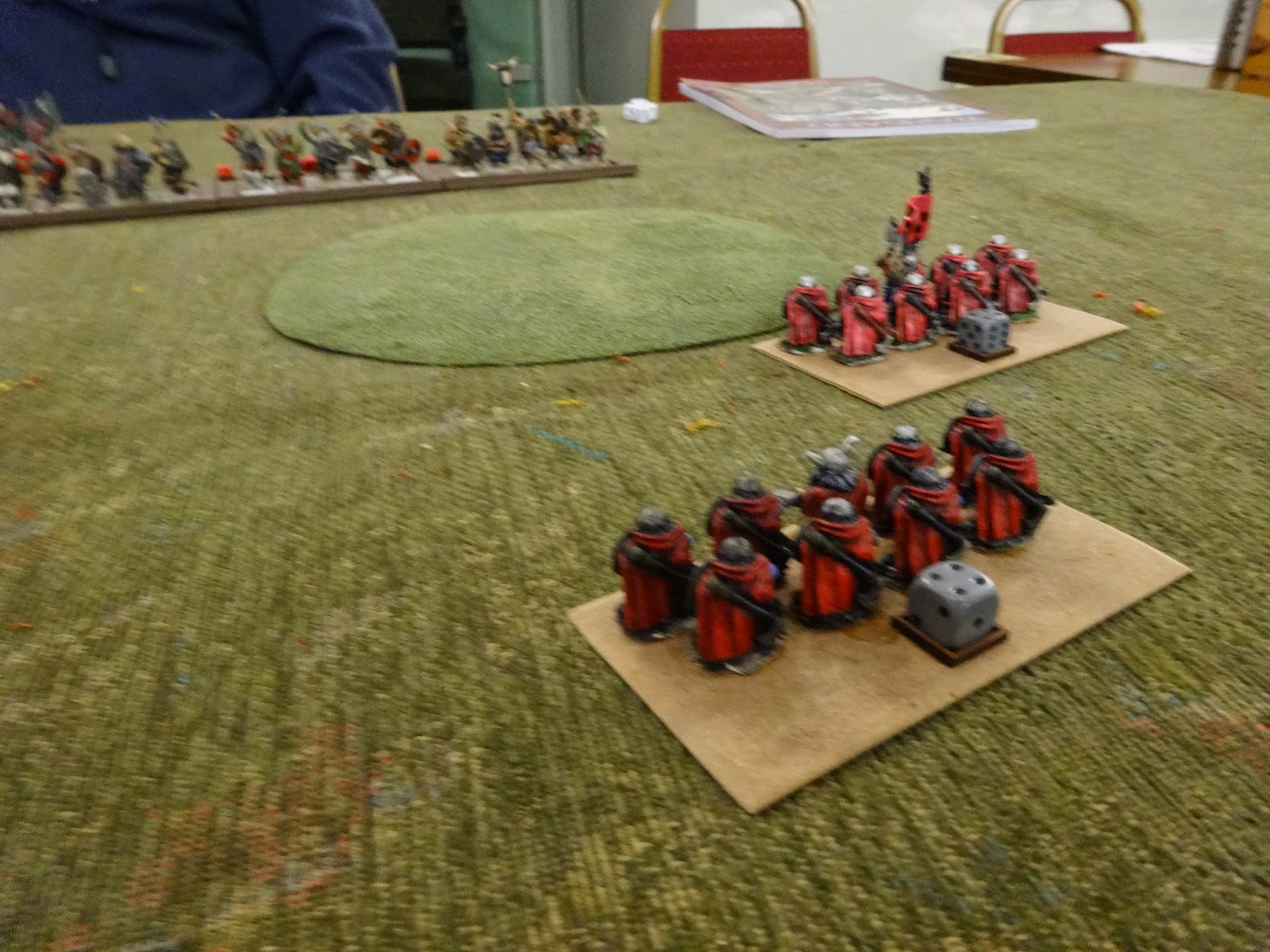 In the far distance Dave has pushed his Marcher cavalry forward and swings his left to meet my right. My general worries that he's out of CP boost range. 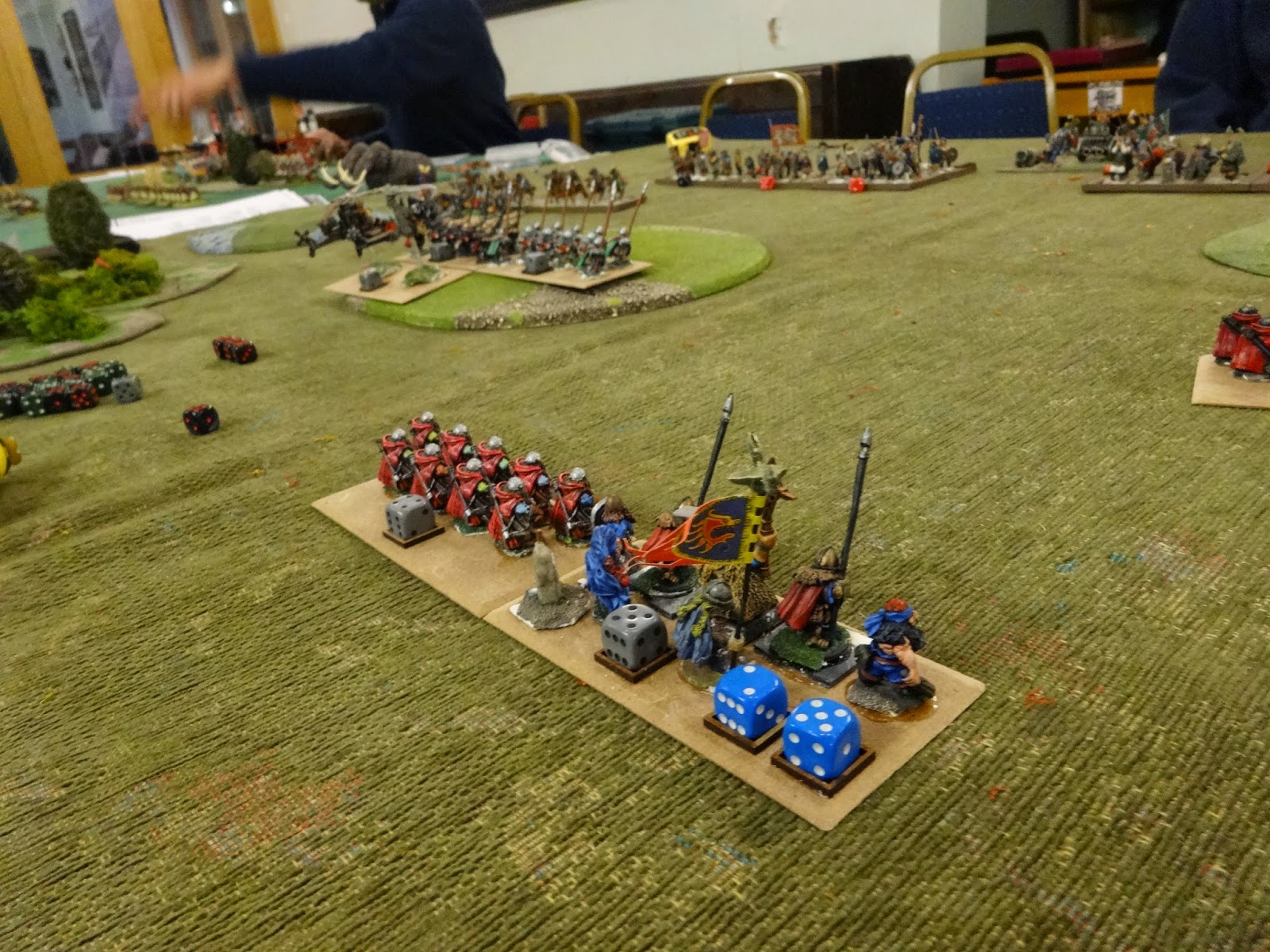 Eventually my hounour guard grow a pair and take on the cavalry. And start to give them a good kicking. 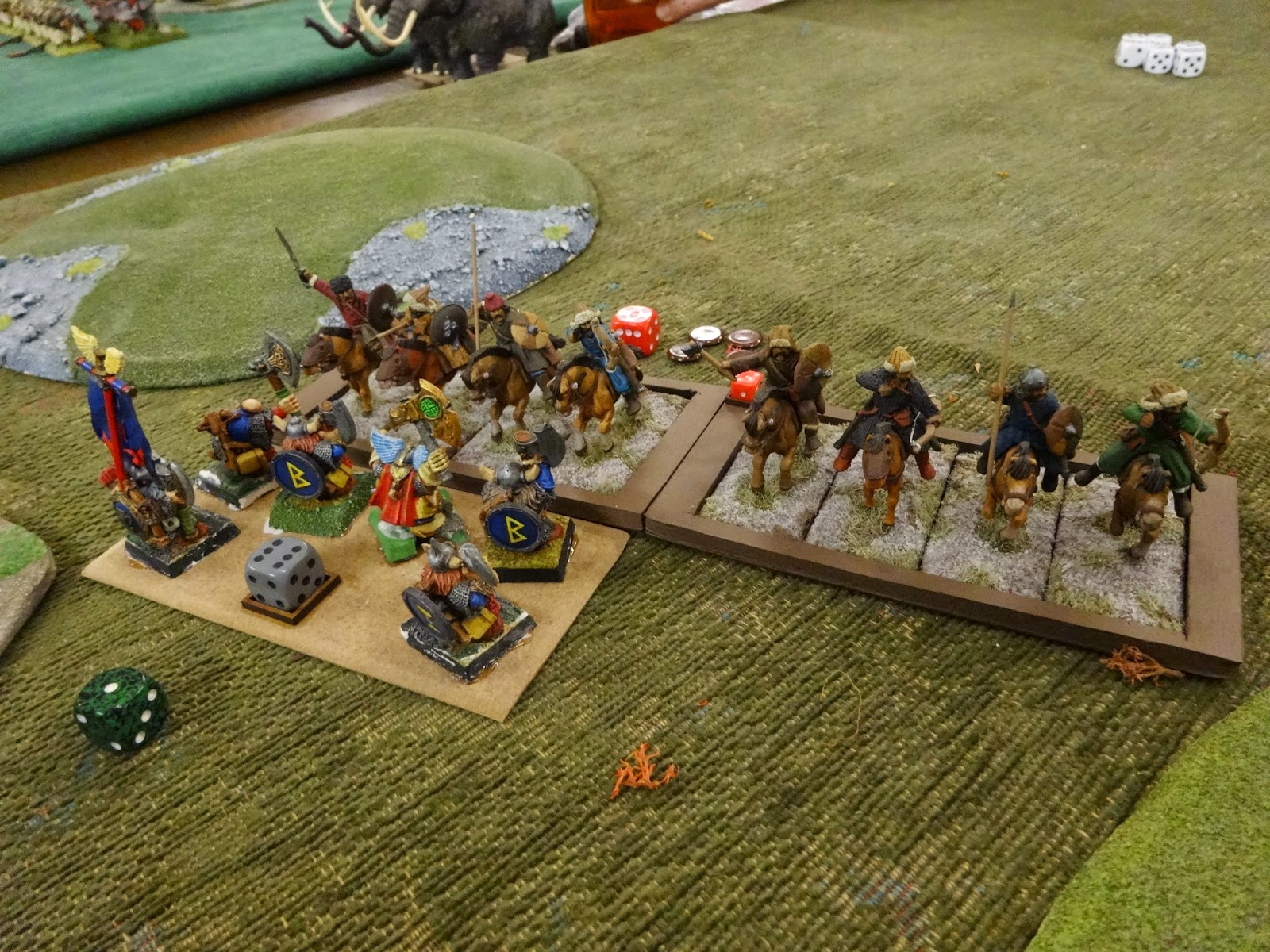 Back on the other flank I give ground as Dave has the hill and an archer unit. As long as I can avoid that and the artillery... 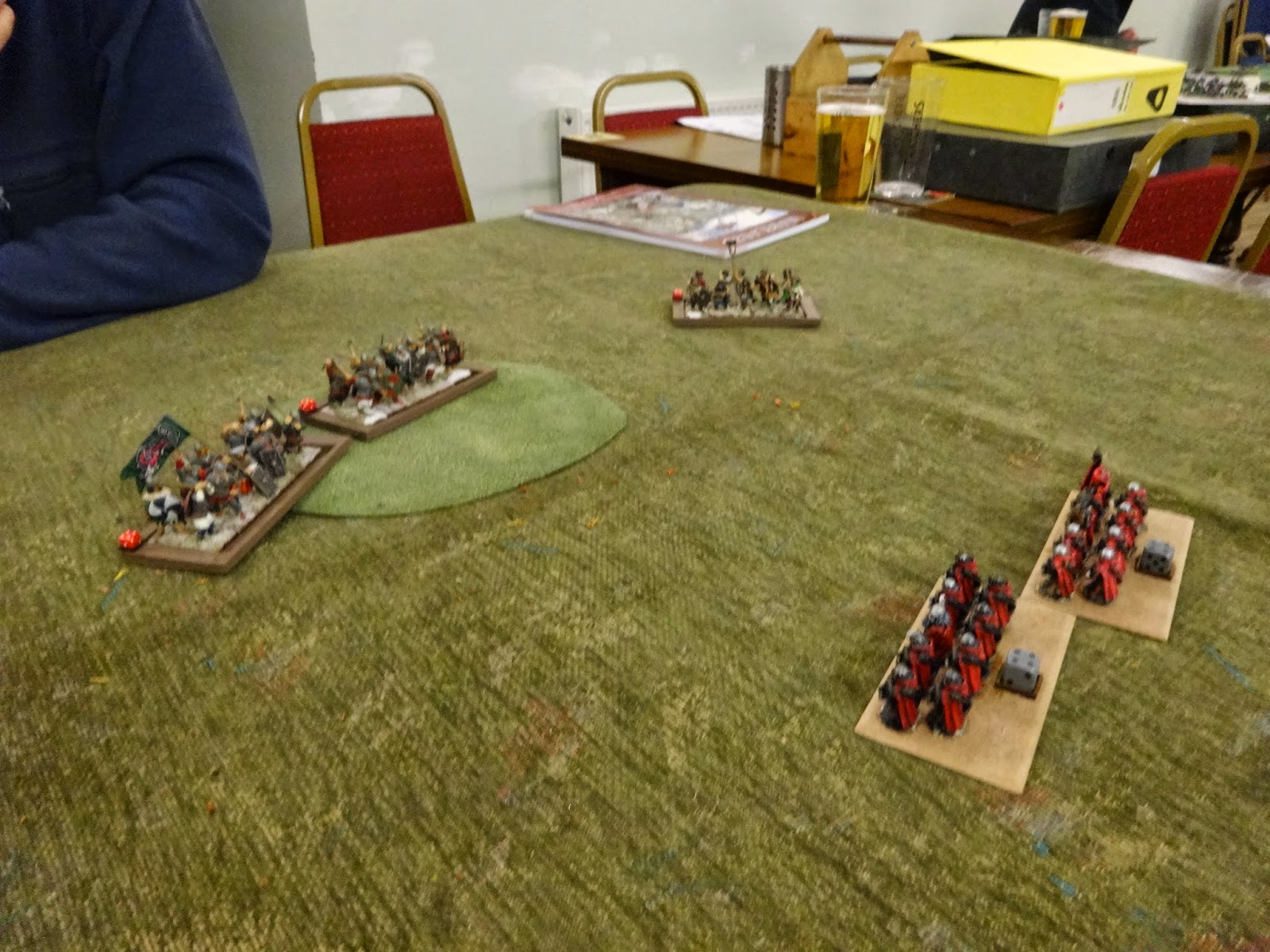 The centre left gets warm. Dave casts flying on 2 infantry and they swarm onto the hill. My gyrocopter makes a nuisance of itself blocking fallbacks and taking pot shots. In the melee the Dragonmen are sent reeling and the dwarves break ranks to pursue. 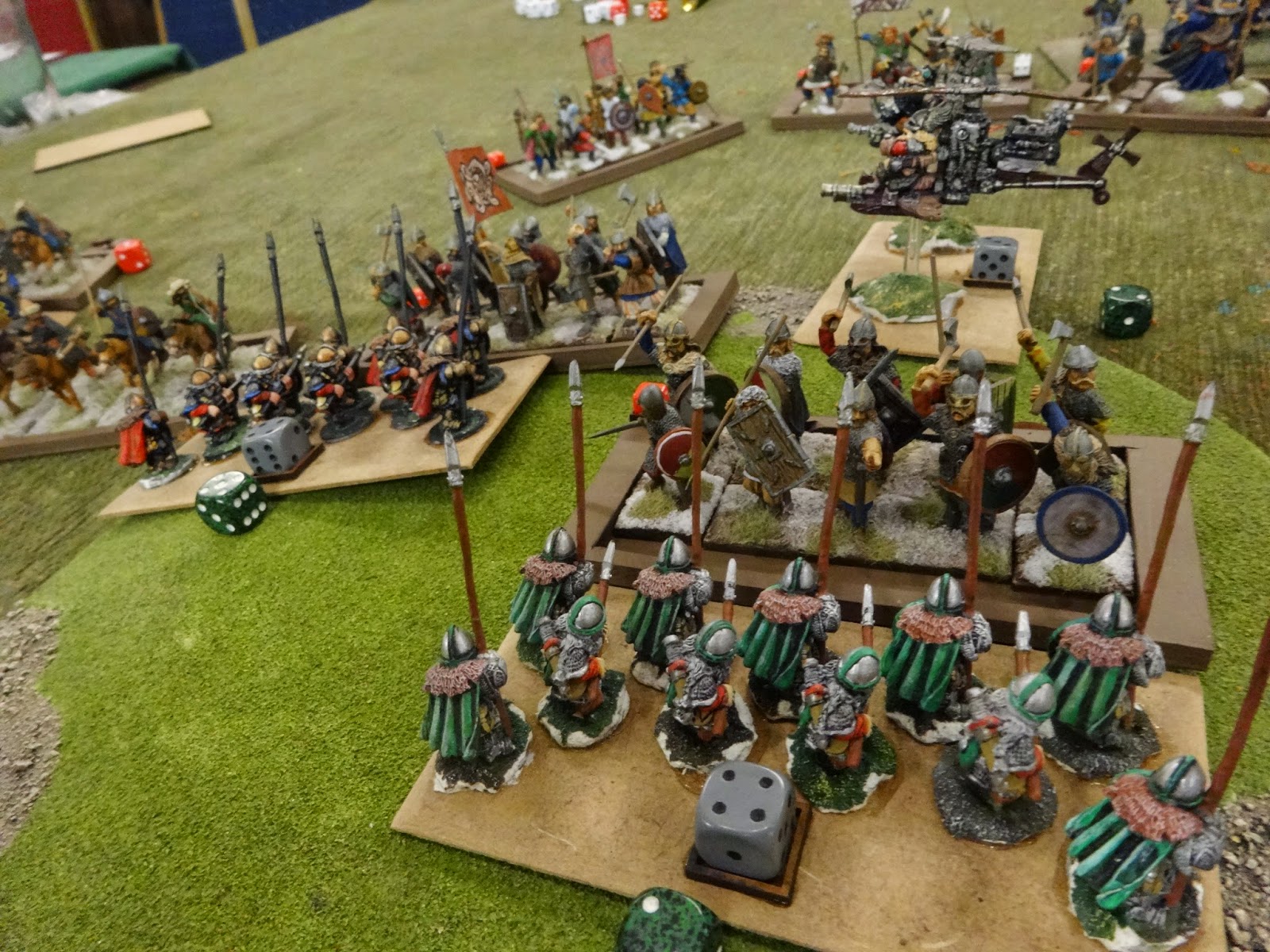 The honour guard push back a unit of marcher cavalry and pursue. 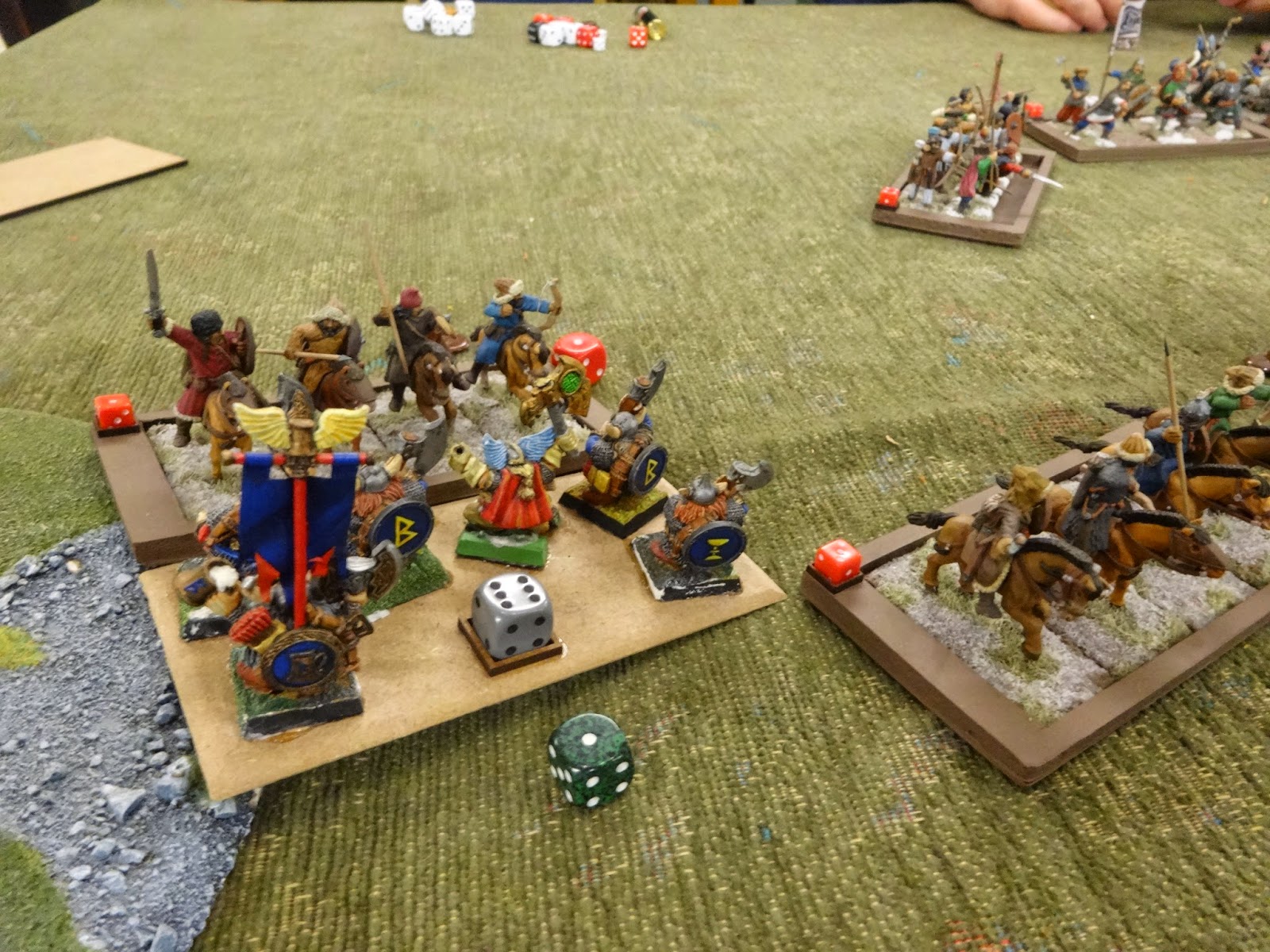 The battle in full flow. 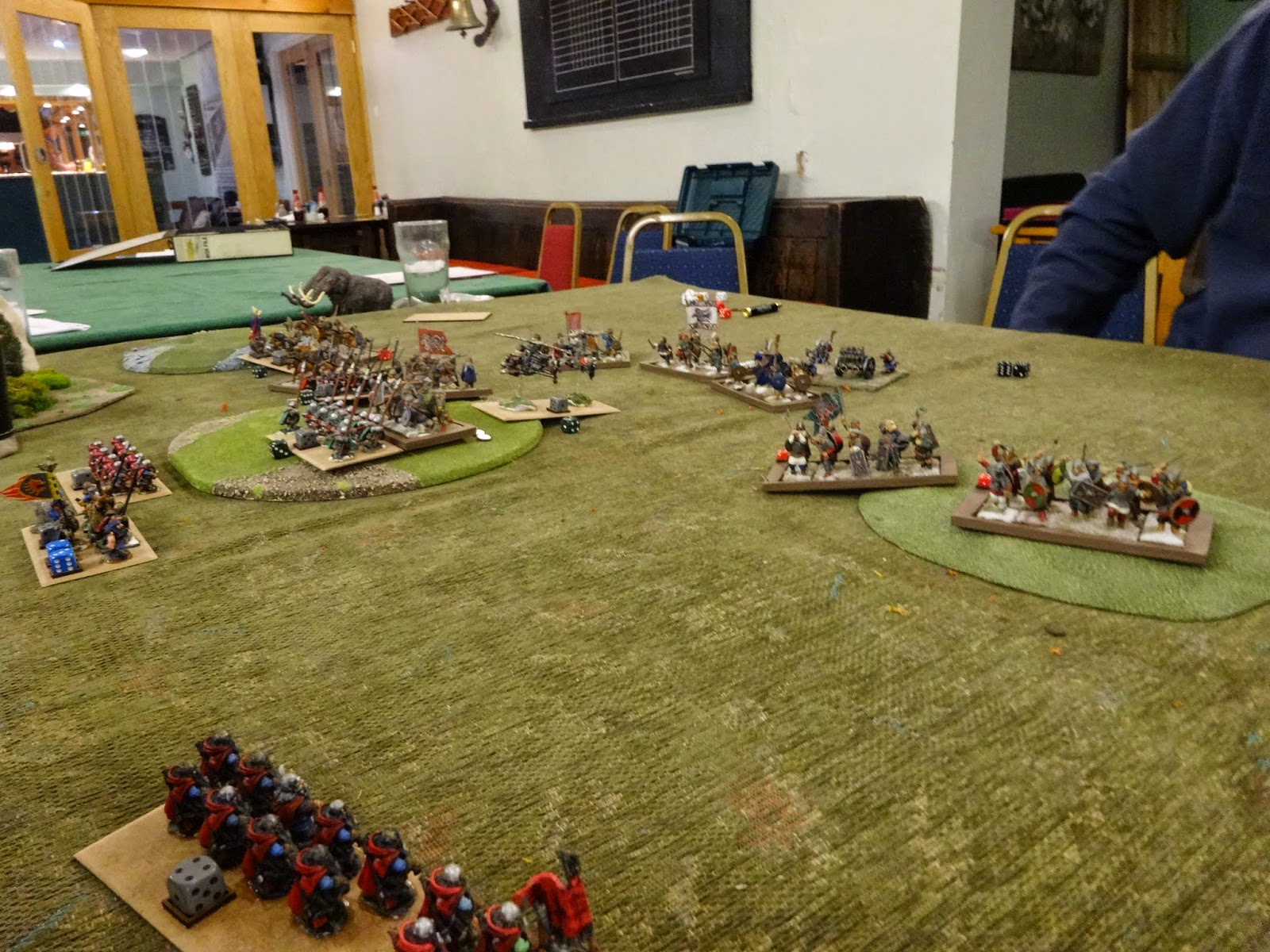 Unfortunately for Dave, just as he needs some decent CPs and MPs it all goes wrong for him. The Dragonmen are pushed off the hill and panic as the gyrocopter swoops in behind. 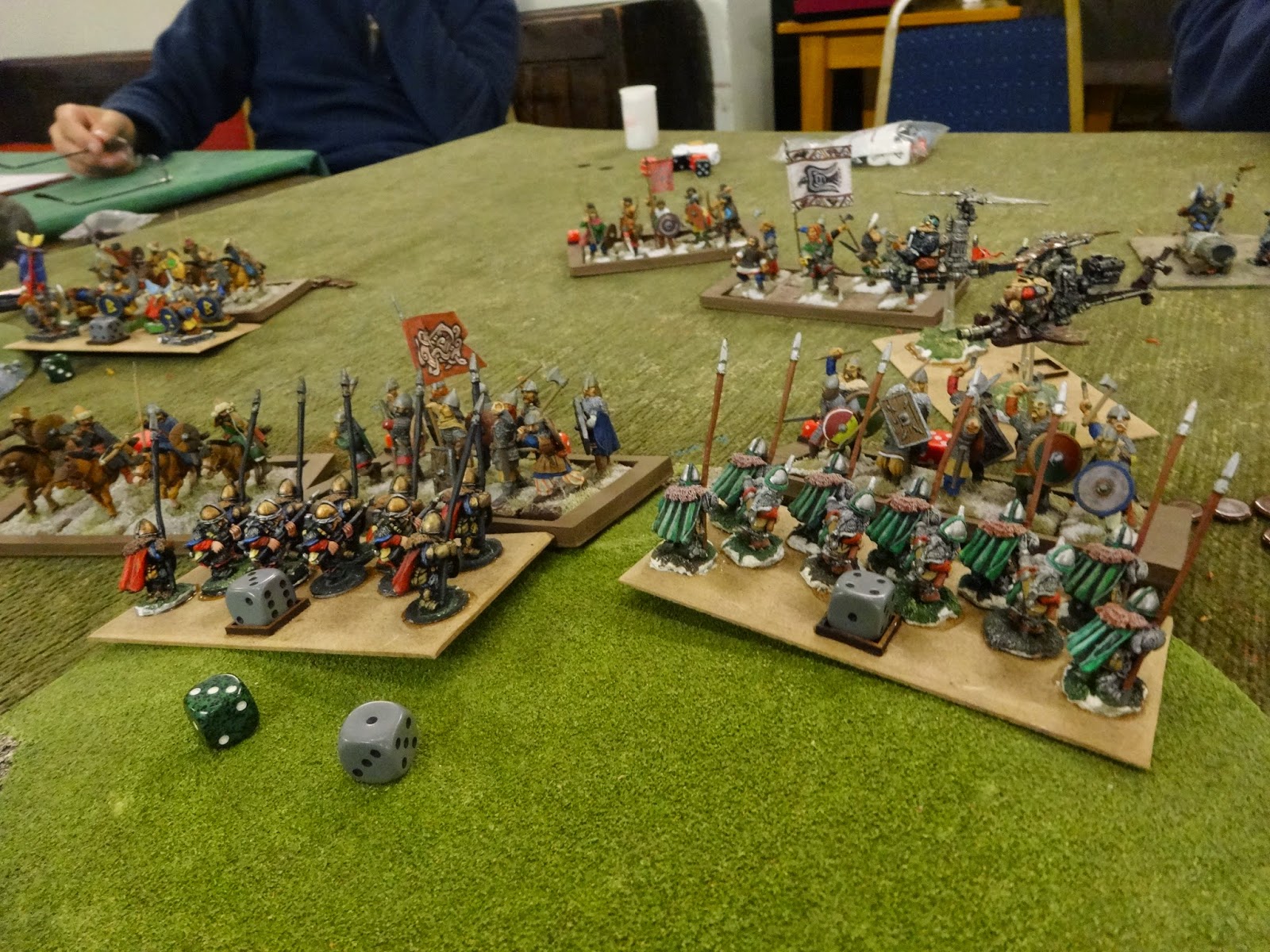 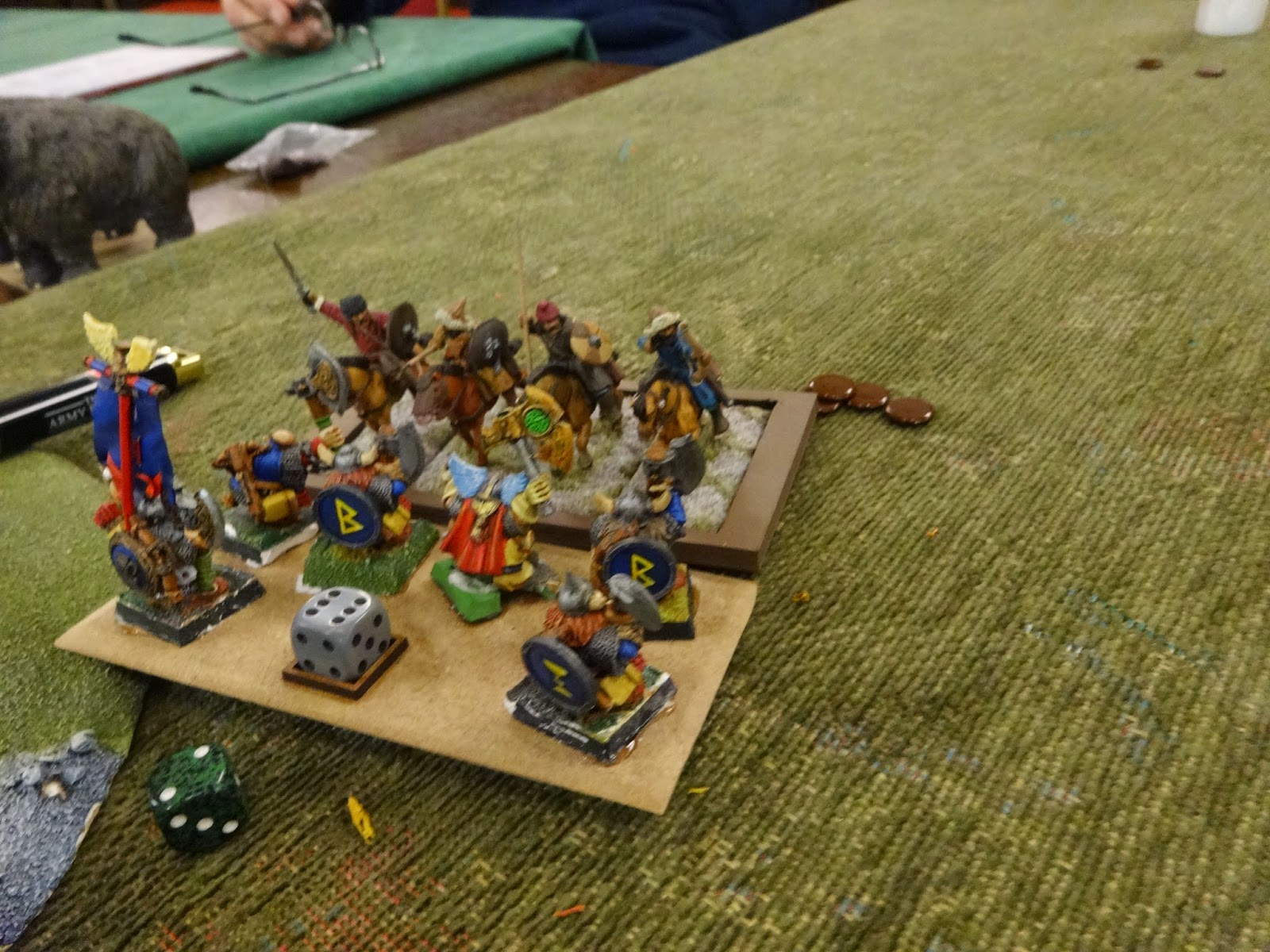 The Dragonmen lose heart and break,  3 units run for their lines. 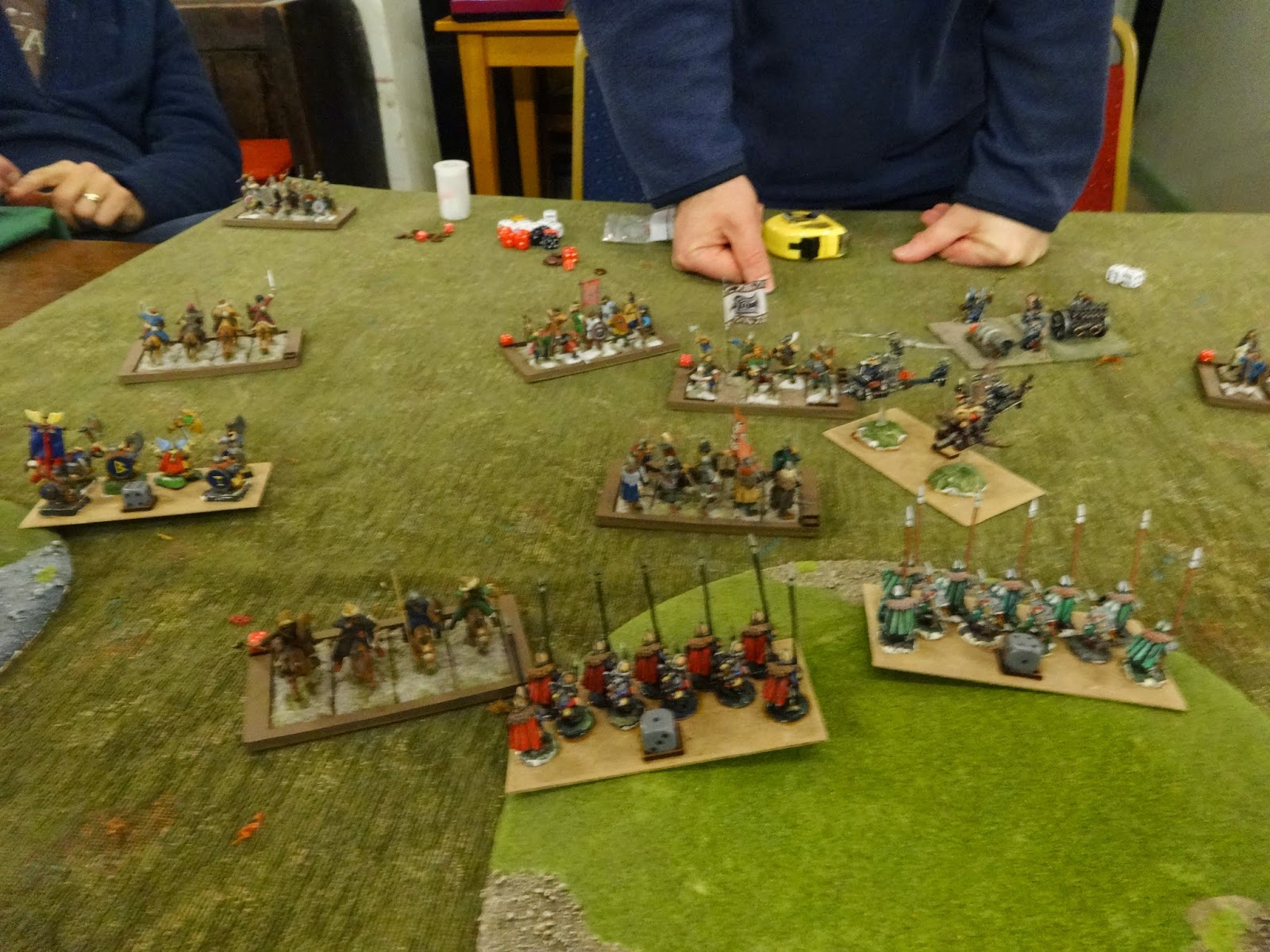 Sadly, or happily for Dave time was ca﻿lled at that point. Dave had lost 3 units for about 100ap whilst my gyrocopter was only just flying. One of the hillwalker warriors had taken some morale loss but were good to go.


Amother fun game. I am liking this set of rules more and more.
Posted by Steve Price at 7:11 AM 2 comments: